Home/Experience 4.5/Maiden Visit to Lord’s Bowled Me Over

Maiden Visit to Lord’s Bowled Me Over 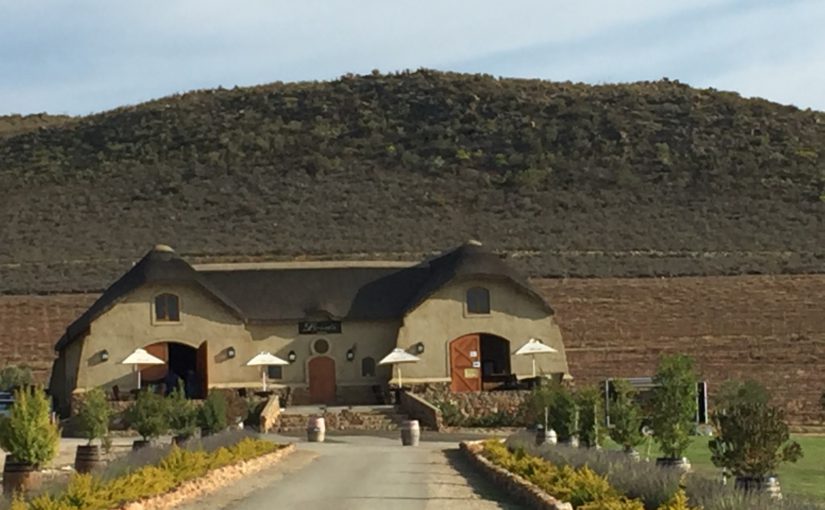 I planned to visit the McGregor vineyards during my Wacky Wine Weekend Saturday, having stayed in McGregor for the festival. I reckoned too that the area might be a little less busy than in and around the Robertson wine farms over the busy weekend period.

The 10am opening gave me time for a leisurely breakfast and start in McGregor. The 15 kilometre drive up into the hills above McGregor, over mostly gravel roads, was a delight in the morning sunshine. The Lord’s thatched gatehouse reminded me of a minor game farm but here (unlike at Abingdon Wines) there was no need for game fencing. The short road led uphill to the main cellar building, also thatched, set in an oasis of green lawn that stood out against the drab mountain fynbos.

The vines are grown on 16 hectares of the 33 hectare Oosthuizen family property that farmed fruit and vegetables and grew protea for export. Terroir is important here and the main factor in deciding which grape cultivars to grow. Lord’s Winery is best known for its Pinot Noir and Chardonnay, which make up 60% of vineyard area. Sauvignon Blanc and Shiraz are also grown on the East and South-East facing Mountain slopes at 500 metres above sea level. This is nearly 300 metres above the Robertson Valley and the cool temperatures help preserve the natural acidity and pH of the grapes.

Owner and winemaker Jacie told me the name Lord’s comes from his devotion to the game of cricket and to its spiritual home at Lord’s in North West London. It seemed perfectly fitting – in more ways than one – that today the Proteas faced Sri Lanka in the opening game of the Champions Trophy in England. Jacie used to play cricket too – below Provincial level – but must now, he said, focus on the Winery.

Jacie’s attention to the wine-making has certainly paid off since the wine farm was built in 2004. Thirteen years on, and 11 years since the maiden vintage of 2006, Lord’s award-winning wines have received equal interest. As I arrived and made my way to the Cellar, lined high with oak barrels, I was surprised at how many people were already tasting. I suspect many may have stayed on from the midnight activities the night before or arrived before the stated 10am opening time.

Ian in the Cellar was hugely attentive and informative as I began with tank and barrel tastings. The opener tasting was the 2017 Sauvignon Blanc straight from the 4320L stainless steel fermentation tank, set at 18ºC. The pale straw wine was obviously fresh and young yet had good balance and complexity. Vibrant fruity green gooseberry aromas filled the glass.

The next 3 tastings were barrel samples, each one being a different cultivar. The 2017 Chardonnay was my least favourite. Clearly, none of the barrel samples were ready for bottling so comment now has to take that onto the scoresheet. I liked the pale gold colour but the light green apple and caramel notes needed to develop, so too does the palate that was far too lightweight. The wine will be matured for 6 to 8 months in 222L French oak 1st, 2nd and 3rd fill barrels and shall be the better for it.

The 2 red wines tasted better. I preferred the Pinot Noir. The colour was a distinct pale ruby and it was light-bodied in appearance. Both aromas and flavours were well developed and balanced. Strawberry and red plum notes mingled with sweet red cherry (not the sour cherry I dislike) with a hint of peppercorn spiciness. Dry, wooded flavours emerged on the palate. This is a wine I shall look out for when it is released.

The Three Barrel Shiraz has an interesting story to the name. One barrel, then 2 were left from earlier vintages as they were so good. These were then blended to make 3 barrels. There’s now over 30 barrels of the wine made. The barrel sample showed all the characteristics of the Shiraz grape: medium ruby to light purple colour; spicy, dark berry and currant on the nose; and oak on the palate.

Wacky Wine Weekenders were by now fast arriving and so I left Ian to other guests. I made my way to the already-crowded Tasting Room that was staffed by son and daughter Jacques and Melanie. I was distracted to start by a table of olives, olive oil and almonds. They were for tasting and for sale; I bought some oil and nuts. Eleven wines were available for tasting (6 coupons available) and so I opted mostly for those different to the cellar wines I had just sampled.

I noticed for the first time the cricket posters and memorabilia on the walls. Seeing them provided me with an ‘aha’ moment for the name of the winery. Hitherto, I had thought of a religious or spiritual (pun intended) origin. I enjoyed the deliberate coincidence between MCC, as in ‘méthode Cap classique’ and ‘Marylebone Cricket Club’, the World’s most famous cricket club and former governing body of the sport – also based at Lord’s in England.

The Brut MCC made from classic Pinot Noir and Chardonnay, a South Africa Non-Vintage MCC award-winner, was refreshing and pleasant. Fine bubbles gave a tingling mouthfeel that was delicate and with a light finish. The off-dry style complemented well the shy apple and white pear flavours. After, the single variety Chardonnay unsurprisingly showed much greater complexity, depth and balance than the barrel sample. Six months’ maturation in oak brought sweeter caramel to the apple notes as well as improved wooded flavours. Dry, with moderate acidity, smooth and creamy on the palate, it was as a Chardonnay should be.

I tasted 3 Pinots Noir next. The first, a Rosé, was very drinkable and even in winter. The colour was classic pale salmon blush but the nose showed unusual blackcurrant with typical red cherry aromas. The balance between dry acidity and the fruit flavours made for a clean taste in the mouth. The unwooded Craft Pinot Noir was also unusual in having a garnet tinge to the ruby colour. The fruity cherry flavours, unripe but not sour, promised much but this wine was lean on the follow though and the finish.

The 2011 Pinot Noir, great value at R120 for its vintage, was my favourite Lord’s wine. Similar in colour to the Craft, I scored it higher for both Nose and Palate. The wine showed greater complexity of spicy fruit flavours and was well balanced on a firmer palate.

I needed to return to Cape Town for a late afternoon meeting, as well as visit Bemind Wyne and Tanagra Wine Farm before leaving, so I chose one final wine (I could easily have tasted all). The Shiraz was a heady 14.5% alcohol and much paler in colour than typical for the cultivar. Darker flavours though prevailed – plum, cherry and peppercorn – that were well-balanced by oak on the palate.

Before leaving, I ate a hearty plate of truffle fries (R45) and cappuccino (R25) from the Jack Rabbit food trailer. I could have bought a cheese and meat platter (R100) but breakfast wasn’t far behind. The snack hit just the right spot, as did the wines.

Lord’s Winery answered the Maiden’s Prayer to give me the perfect start for the day. I have heard McGregor village unkindly referred to as a cul de sac. There may well be no way to get out of the village other than to return to Robertson but Lord’s truly is at the end of the road. A beautiful place it is. The wines were decent too – I bought 3 bottles – and deserving of their reputation. The Pinots Noir in particular offered great value for money. I left with a feeling of satisfaction and really enjoyed the experience.