The Early Bird Catches the Wine 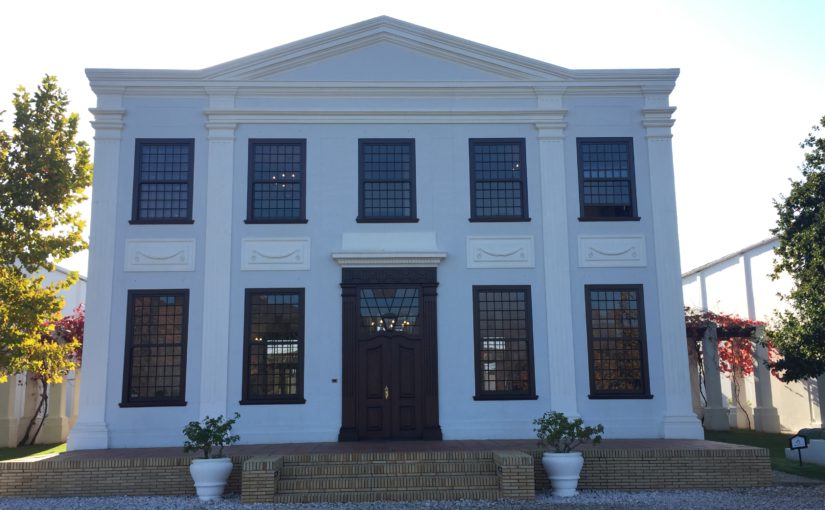 De Wetshof offered one of the few Wacky Wine Weekend activities that interested me. The ‘Bubbly of the Valley’ event was, however, fully booked. The promotion material invited wine lovers to “start your Friday off in style by tasting top sparkling wines”. The timing showed a start time of 1600 hours but when reading the small font it could have been 1000 hours. This made much more sense as the time to start the day off. I thus set off early for the De Wetshof Estate in the dual hope that the tasting event started at 10am and that I might be able to sneak in for it.

A Promise of Something Special

Gold lettering on the wall of a vineyard entrance gate always promises something special. Hamilton Russell and Bouchard Finlayson come to mind with their elegant, refined, quality wines in the Hemel-en-Aarde Valley. It speaks of a confidence in class rather than brash nouveau riche. The Jacaranda trees that lined the estate driveway, flanked by neat gold coloured vines, were not in flower. Nonetheless, the approach to the formal, white-fronted Manor House was no less impressive. It could easily have been a minor French chateau even though the façade is modelled on the historic First Customs House in Cape Town. The symmetrical Georgian-style architecture imposes but doesn’t overpower.

A lone palm tree at the end of the drive and the low Cape Dutch farmhouse close to where I parked reminded me I was in the Cape in South Africa. Much to my surprise, I was the sole Wacky Wine Weekender as I entered the empty Tasting Room. The elegant room was as formal as the building façade. It was impeccably furnished and decorated. White flowers were in vases on crisp white linen tablecloths on the tables. The Tasting Room and offices are a replica of the Koopmans/De Wet House in Cape Town, dating back to 1791 (also of the Georgian architectural period).

It turned out that 1600 hours was indeed the Friday ‘start’. This turned to my great advantage as I had the sole attention of Heinrich for my tasting. Even more so, he was a Cape Wine Academy student which always makes for a fun and enjoyable tasting.

De Wetshof is the oldest estate in the Robertson Valley. Since the early years of 1972 onwards, Danie de Wet pioneered the development of noble white wines in the Valley. The first Chardonnay, Sauvignon Blanc too, was marketed in 1981. National and then International recognition was recognised within 4 years. Today, aided by wife Lesca (Marketing) and sons Johan (Viticulture and Marketing) and Peter (Winemaker), white grape varieties remain the most grown cultivars (90%) on the 600 hectare property.

Soil and climate combine to make ideal growing conditions for the 208 hectares of Burgundy grapes. The dry climate (350-400mm of rainfall per year), southerly Agulhas breeze, chilly nights and summer morning mists bring even and balanced ripening. Technology is used to focus drip-irrigation to supply the correct amount of water to reduce vine stress in each block (35 Chardonnay included) of every vineyard. Robertson Valley soils have some of the highest free limestone content in South Africa. This influences the pH structure required for fruit balance. Each vineyard has different soil characteristics and this, as I found out during tasting, brings unique characteristics to each wine.

Chardonnay dominated the tastings. It was no surprise given the terroir. I began with the popular Sur Lie, made in Chablis-style, with elegant light apple flavours and graceful minerality. The unwooded Limestone Hill and Bon Vallon that followed ably showed the effect of soil type on the wines. The Limestone Hill comes from vines grown close to the Breede River in heavy, deep clay soil that is rich in limestone. I detected slight tropical aromas and flavours – light guava, pineapple, baked apple – and a dense complexity to clean the palate. Rocky, slate soils near Bonnievale brought shy, flinty, clean French-style citrus notes to the Bon Vallon that was light in the mouth and with an extended finish. I bought a bottle of the Bon Vallon.

I rated the Finesse/Lesca Chardonnay as high as the Bon Vallon. Unlike the 3 wines I had sampled so far, the Finesse/Lesca was wooded from 10 months 2nd fill French oak barrel maturation after an extended period on the lees. This gave the wine an amazing nose full of fresh stewed apple with honey and caramel that followed seamlessly through to the palate. This Chardonnay, and the others, was near 95% as good as the Estate Chardonnay at Hamilton Russell Vineyards but at half to third of the price.

Heinrich was spoiling me rotten as fresh bottles were opened and extra glasses provided so I could taste the Chardonnay side by side. The final 2 Chardonnay came from grapes that were grown on slopes with different aspects. The vines for The Site, my favourite wine of the tasting, face South-East and benefit from morning sun. Green citrus and orange peel notes mingled with warm toasted, honey, caramel on the nose. The 12 months’ barrel fermentation showed through to give great balance to a smooth, fresh palate. I bought a bottle of The Site too.

The top of the range Bataleur, named after the majestic eagle, comes from some of the oldest (1987) De Wetshof Chardonnay vines. The 3.5 hectare vineyard faces North-West and contains heavier clay soils. This was another outstanding wine. Stewed apple, caramel, and light pineapple excited the nose – with slightly less oaked notes than The Site – to give depth and light creaminess on the palate.

I was already beyond my regulation 6 Wacky Wine Weekend tastings but Heinrich had more for me to enjoy. The Riesling had the classic and unmistakeable kerosene nose with litchi, green melon and gooseberry notes. Slightly off-dry on the palate, the acidity was firm and crisp.

The still Limelight Chardonnay Pinot Noir contained the same proportion of each cultivar as the sparkling MCC Cuveé Brut wine. They made an interesting side-by-side tasting comparison. Very pale salmon in appearance and with elegant but delicate fruit aromas on the nose – strawberry and sweet, red cherry – the Limelight held its promise on a dry, soft, crisp palate. I preferred the MCC (just) with the clean moussante mouthfeel and chalky, light apple and brioche flavours. The other Brut MCC, single variety Pinot Noir, was a similar pale salmon colour in appearance, showing hints of medium gold, and with added light maraschino notes. Sweeter strawberry flavours fed through to the palate containing toasty nougat flavours and a clean, elegant finish.

The tasting ended with 3 red wines made from 3 different cultivars. I could immediately taste the terroir-driven De Wetshof philosophy in the red wines too. The Nature in Concert showed classic Pinot Noir light body and pale ruby appearance. Sour cherry met cranberry on the nose to make for a sweeter, softer, fruity, dry palate than many I had tasted. Barrel-aged for 12-15 months, nutty flavours also showed.

The Naissance Cabernet Sauvignon (naissance meaning birth or origin or growth) showed similar characteristic French style for the cultivar. I liked the fruity – delicate but elegant – dark berry blackberry, dark plum and dark cherry flavours and grippy tannin palate. Alcohol (14%), tannin and fruit matched to perfection. The Thibault Merlot (5% added Cabernet Sauvignon) was my equal-best rated wine. It reminded me why I liked Merlot with its Bordeaux cassis, cherry, berry notes and structured elegant, smooth cedar and oak flavoured palate. This is a quality wine to drink now and will only improve on keeping for a further 10-15 years.

Tastings over, Heinrich briefly showed me around the Cellar. We passed the marquee and tables set for the afternoon MCC tasting. The Cellar with its tall stainless steel fermentation tanks and floor lined with 300 litre French barriques was impressive. I could have lingered more but Heinrich had other Wacky guests to see to and I wanted to move on to visit the Arendsig Estate.

I left De Wetshof with a glowing smile and knowing that I had experienced something very special. The wines were superb and the reputation for some of the best South African Chardonnay – World-class even – is well founded. It mattered not that I had intended to sample 6 wines over the course of an hour. I would not have missed any of the 13 wines tasted over 2½ hours. It mattered not too that I missed the afternoon ‘Bubbly of the Valley’ event. The personal attention I received – I met Johan and Peter de Wet in passing too – was outstanding. It barely seemed that I was a part of the Wacky Wine Weekend. As they say in wineland territory, “The early bird catches the wine” ….