Judge and be Judged! 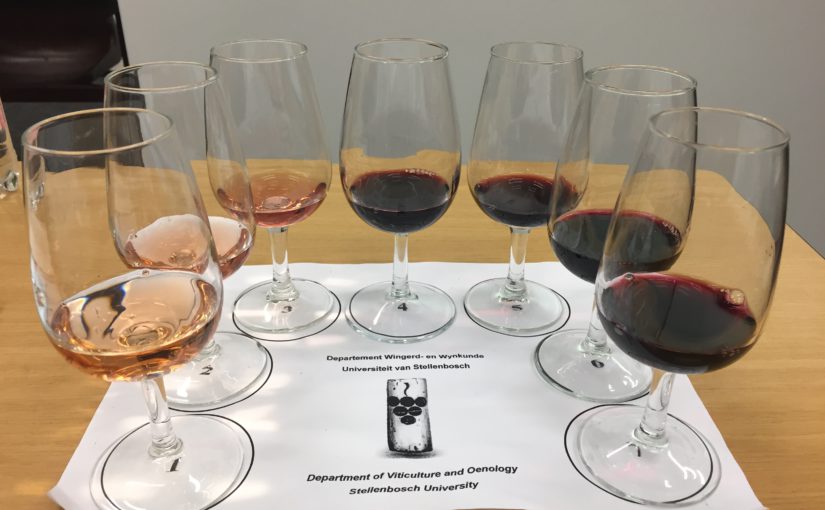 I enrolled for the Certificate in Wine Evaluation Short Course as I wanted to learn how to score and assess wine for quality. Run by the Department of Viticulture and Oenology at the University of Stellenbosch, it gave me the opportunity to experience a different training provider to the Cape Wine Academy. Successful completion would give me a US Certificate in Wine Evaluation that would allow me to serve as a taster on panels of the South African Wine and Spirits Board and also the South African National Wine Competition Association (Young Wine Show and VERITAS).

The course (R2100 fee) was held at the University on 3 evenings (6.00pm to 8.30pm) from 12 to 14 June. I was joined by around 40 students who were mostly winemakers and students. I felt slightly apprehensive but excited at the start not knowing what to expect. Italian-born Valeria Panzeri was the Course Tutor and aided by a panel of 4 experienced tasters and wine evaluators. She is from the Faculty and a specialist in wine taint.

The first 2 evenings were practice tastings and the third eve was set aside for the exam. During the practice sessions, I had to score wines of different styles and cultivars – single variety as well as blends, dry to sweet – for quality. The standard 20-point scoring system was used. A wine could be rejected for any 1 of 25 faults, whether Clarity, Colour or Flavour and Taste.

The wines were efficiently presented in ‘flights’ each rated and then replaced by another flight. The vintage and style of each wine was given. I assessed 41 white wines on the first evening (sparkling, still, late harvest and jerepigo) and 37 red wines on the second (blanc de noir, rosé, muscadel, Cape tawny and vintage). Time passed quickly and there was not long to score and detect faults. Valeria and her panel consulted at the end of each flight and then announced their score and findings to the class.

I was taught the 20-point scoring system by the Cape Wine Academy and use it during my vineyard tastings. However, this was the first time I had a benchmark against which to compare my score. The Panel judged harsher than I have been and so I had to score 1 or 2 points downwards. I also learned to take note of the vintage, especially when considering whether to accept or reject for ageing characteristics. Two-thirds of the wines were rated at 14 or 15. There’s little between an appearance/nose/palate score of 3/5/6 and 3/6/6 or 3/5/7.

Certain wines, at random, were ‘spiked’ to simulate a particular wine fault or faults. The faults were really difficult to pick up. This was because I had no prior experience. I learned only about the theory of cork taint, microbial decay (‘Brett’), oxidation and sulphur smell during my Cape Wine Academy training. Here, there were over 20 more that included inter alia Insufficient Cultivar Character, Overaged Character, Rancid, Fault Acid Balance, Bitter, Tannic/Astringent and Thin/Watery. I asked Valeria how one learns to detect these faults. She said ‘by experience’. I would have liked, indeed expected given the fee, the Course to have included some training about key faults at the start. Tasting a flight of faulty wines, each described and discussed beforehand, would offer significant improvement to the Course. I wondered if I should have done the Cape Wine Academy Faulty Wine Course first (I shall do the next one on 30 August). I suspected too that many of my fellow winemaker students had this training already and perhaps there was no need to repeat.

However, I was really pleased to have picked up Mouldy Character (cork taint) in a 2015 Dry White included in the 2nd flight. I had not tasted before so this was doubly satisfying. The grounds for acceptance or rejection often appeared very narrow and particularly so for faults around Overaged Character and Oxidation. The Panel members did not always agree between themselves (there are always an odd number of persons on a Judging Panel) and so majority decision was taken. This could result in an individual wine either being rejected or scored a lowly 13 out of 20 I learned that Thin/Watery referred to the feel on the plate rather than the appearance (wines had water added to simulate the fault).

My ratings improved throughout the first and second day. By the end, I was mostly within a point of the Panel score but not always so. As ever, wine can humble. I matched the Panel for 6 out of 7 wines (a fault correctly identified) for the 2nd flight of reds. I matched just 1 from 7 for the next flight.

The exam brought all together in one evening. I had to assess in under 2 hours the quality of 52 wines, both whites and reds, in 9 flights. The score sheets were slightly modified and the number of potential faults reduced from 25 to 10: Cultivar, Sulphur Compounds, Volatile Acidity, Mouldy, Overmatured, Sulphur Dioxide, Foreign Wine, Style and Oxidation. We were told beforehand too that some wines were duplicated to see whether we scored the same. The pass mark is 50% and marks are awarded depending on how close (or not) the score awarded is to the Panel score, as well as whether a wine is rejected and for the correct reason. Results are not due until early August. I hope to pass but unsure how much my inexperience will tell.

To conclude, I am pleased to have attended the Course. I learned much from the tastings and all the more so as my knowledge start point was low. This of course is the reason I enrolled. It is not often that I say this but on this occasion I would have liked more theory teaching before the tasting evaluations (this is why I did not rate my Experience more than 3.5/5). Meanwhile, I await my result which shall likely be announced before I take the Faulty Wine Course with the Cape Wine Academy. I shall be writing about after and most interested in both!