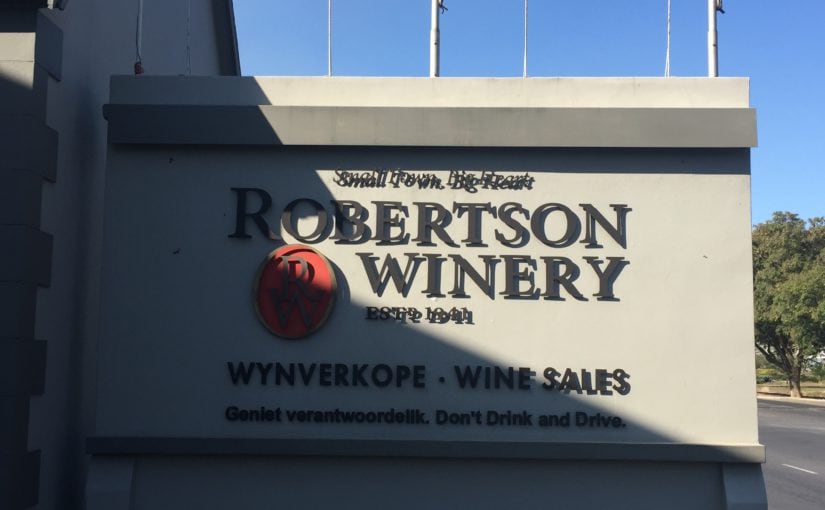 It took little time to drive the 10 kilometres from Rooiberg Winery to reach Robertson Winery. The Winery is towards the centre of the town with its same name. I arrived at the cellar to find it remarkably quiet. This would have surprised on any day but all the more so during the Wacky Wines Weekend. The reason became clear when I introduced myself to Yvonne – chatty and knowledgeable – in the Tasting Room. It turned out that I was in the wrong place and at the wrong time! The Wacky location for Robertson Winery was a short distance away, to accommodate the intended large numbers, and participation didn’t start until 2 pm.

It mattered not as the Tasting Room was open as usual. This is a tip for Wacky Wine Weekenders for the future. There is a chance of being able to taste at some vineyards outside the official event times. The Tasting Room was small and intimate and with an interesting mini wine museum in the adjacent room. Robertson offered an even wider product range than Rooiberg Winery. The Tasting sheet listed a staggering 90 products. These range from grape juice and low alcohol wines to fortified wines and brandy, still to sparkling, and a plethora of box wines in cartons from 500ml to 3l in size, together with white and red wines of different quality levels.

Robertson Winery has deep roots as does the town. Robertson itself began from humble beginnings in 1852 and is named after the Scottish Reform Church Minister Dr William Robertson. Farming industries have always dominated this fertile area. Wagon building was an early industry but collapsed after the 1899 Boer War when the railways took over the transport of goods. Robertson then turned to ostrich farming but this collapsed too after the First World War. The farmers turned to fruit and wine farming. This remains the major economy today.

The Winery was first established in 1941 in a missionary chapel on the outskirts of Robertson that was no longer used. I wondered if the Cellar was in the same original building. It was not until 1984 that wines were first made with the Robertson label. Since then, there has been continuous development in branding and extension of the wine range. The original farmer ethos remains. Wines are made from the diverse terroir by the people who understand and work the land. Over 35 farming families are already 7th generation grape growers. That is impressive indeed.

Many of the wines for tasting were either out of stock or not for tasting. This was a shame as I had wanted to sample the premium Vineyard Selection. I chose from 3 ranges: the mass production Robertson Range; the Fat Bastard Range and the Barista Range, priced at around R40-50, R70-90, and R65, respectively.

I learned that the Fat Bastard name originated in France. The first wine made was a full-bodied Chardonnay, hence the cheeky name. Robertson bought the name and is permitted to use it in South Africa but not for export. The Sauvignon Blanc was nothing special being unidirectional in complexity and simple on the palate. The cheaper Chenin Blanc, from the Robertson Range, was much better and very drinkable. Classic watery pale straw with a slight green tinge in appearance, pleasant tropical guava and mango notes emerged on the nose. My favourite wine was the Barista Chardonnay. It was not overly oaked, had good balance and fruity citrus and peach flavours.

I sampled 4 red wines, each made using a different cultivar. I scored the Fat Bastard Merlot and Shiraz the same. Both were typical of their grape variety and with good fruitiness but showed moderate complexity and balance. I didn’t especially enjoy the sour cherry Robertson Range Pinot Noir that was too lightweight on the palate and with a thin aftertaste. The Barista Pinotage surprised. Strong coffee – the most obvious I have sensed – overpowered the nose with underlying dark plum and cherry notes. Wooded flavours came forwards on the palate. It was not a style that I prefer but I bought a bottle for the Society to experience.

I ended with the Special Late Harvest Gewürztraminer, great value at R45. I liked the classic rose petal and litchi notes even though they faded on the palate with less complexity than I expected.

My visit to Robertson Winery was definitely worthwhile. There were parallels with Rooiberg Winery. The visit showed the benefit of tasting before buying, and especially so for a bulk producer with an extensive product range. Unsurprisingly, the quality varied. Robertson wines offer a complexity and balance to match the price and market. There’s nothing wrong in that – sometimes one just wants an easy drinking and undemanding wine. I was nonetheless able to pick out some great value for money wines. My next Wacky Wine Weekend stop was to be Excelsior Wine Estate. The Robertsons have done well.