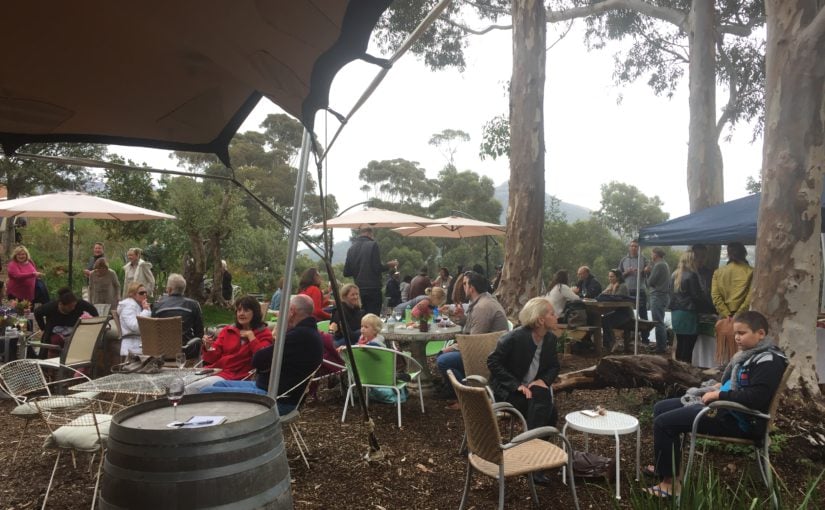 It was a typical grey May day in Cape Town as I ventured up Constantia Nek. Constantia Mist and Silvermist vineyards are named so for a reason. The sun was trying its best as my altitude declined and I arrived at Hout Bay Vineyards for the second day of their 2017 Open Day. Hout Bay Vineyards has no complicated name. It is, as they say’ “What it says on the tin”. There’s no complicated marketing-speak here. And that’s what I love about the place – the boutique and small vineyards in general – is their decent honesty and darn good wines.

The wines on offer for tasting at the open Day (R50) were mostly the same as I had enjoyed before but I was nonetheless eager to try again. It was not long after noon but many were here already. It was good to see Cathy again too. She poured me a glass of the Blush Rosé, dry elegant and very champagne-like in character. Unsurprisingly so since, but for a splash of Viognier, it is made from the classic 3 champagne grapes.

I ventured into the cellar I had remembered so well from before. Little had changed bar the intimate tasting room upstairs. The table had been temporarily taken away to make space for wines maturing in oak barrels that were awaiting bottling.

I ventured outside and met Peter, her husband, and winemaker. I had not met him before but had wanted to. By now, I had the youthful, lively Sauvignon Blanc in hand. I knew it was made from grapes in vineyards beside Suikerbosse (albeit not visible from the road) and higher up in Constantia Nek. Peter explained how, after 13 years, he feels he is just starting to understand the vines. That may sound like a really obvious observation for a winemaker to make, but I had not heard it before.

Peter went on. “I can tell, by looking at the grapes, what kind of wine I can expect this year”, he said. That, he explained, dictated the style and flavour of that particular vintage. “There’s no point in trying to replicate the wine from a previous year, as the grapes are not the same”. It all made immediate sense to me and, again, is why I like the simplicity – and I am not for one moment saying that winemaking is simple – of the small vineyard.

The 2 vineyards, even though with the same cultivar, clone and graft (but different rootstock as differing soils) produce grapes with different flavour profiles. Those from the lower vineyard (150m), barely 1 kilometre away, are green, grassy and herbaceous on the nose. The grapes harvested from Constantia Nek, at some 190m above sea level, bring fruity, grapefruit and guava flavours to the palate. This is where the skill of blending comes in. Peter blends 70%: 30% to give a fresh, crisp, acidic Sauvignon Blend with a grassy nose and fruity palate. Wine is one of the most fascinating activities I know. I understand too why I like the evenly balanced grassy, fruity Sauvignon Blanc from Silvermist so much.

I bought a small charcuterie platter with Italian meats, made in Observatory, bread and olives before sampling the red wines. The Merlot was light in style and character, pale ruby and light-medium body in appearance. Fruity cedar notes followed through to a surprisingly firm lingering palate.

The Shiraz was the wine I had been looking forwards most to savouring again as it was my favourite at the previous tasting. I am delighted that my memory was absolutely correct. The Hout Bay Vineyards Shiraz remains one of my favourite of all – light, dark berry fruity, peppercorn spicy – and very drinkable! The tasting finished with the 2013 Petrus (I had tasted the 2011 before) that was still a classic Rhone blend that will mature and get even better.

I was counting down the minutes to start of the Monaco Grand Prix – Formula 1 being another passion of mine – and so went to thank and bid farewell to Peter. He was with friends in the cellar and beckoned me in to taste some older vintages. He was opening an unlabelled 2008 Cabernet Sauvignon and a bottle of his first Bordeaux Blend (2007). Priorities can change very quickly when faced with such a treat and a privilege …. The cabernet Sauvignon was a deep ruby colour, with flavours of deep berry, mulberry and blackberry. The Bordeaux Blend was even deeper and made in a heavy style, dry and with more tannins. This was wine that could mature for another 5 years and be even better.

Peter generously offered in late July, during a weekend afternoon, to give me and Cape Wine Lover’s Society aficionados a technical and vertical tasting of the Petrus vintages and other wines with him. This promises to be a real treat and so let me know if you’re interested to join. Meanwhile, I left without buying the case of Shiraz that I wanted – yet another excuse to return! Oh, and I missed the start of the Monaco Grand Prix. It didn’t matter at all. Hout Bay Vineyards and their wines just have that affect on me.