Home/Experience 4.5/Wines Made to Stand the Taste of Time

Wines Made to Stand the Taste of Time 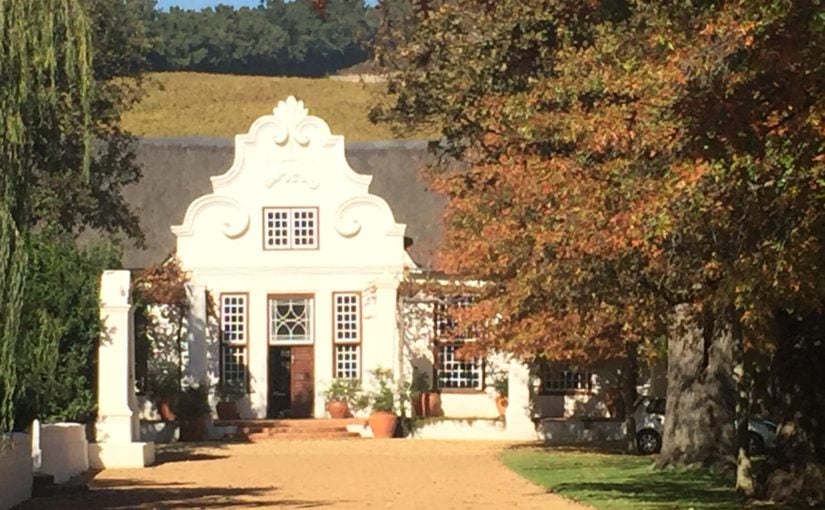 I was at Morgenster for a pressing engagement – in more meanings of the word than one – thanks to wine.co.za. I was invited to the launch of the new wines and labels for 2017 and unveiling of the new olive press. I wore my name-badge with the word ‘Journalist’ beneath my name with pride as I sense the Cape Wine Lovers’ Society brand growing in recognition and significance. More on that will be written later.

The drive to Morgenster from Cape Town was easy and the Estate was easy to find, some 6km North of Exit 43 of the N2 at Somerset West. Morgenster has some big name neighbours on the Lourensford Road as I passed signs for Vergelegen and Lourensford. Surprisingly, for a famous historic estate, the entrance was via two simple white pillars rather than the sweeping ornately lettered gate I might have expected.

Oak trees, vines and olive trees lined the curling road to the modern wine and olive Tasting Room. Modern it may be but the large clay Spanish amphorae and long tasting tables were over 200 years old. The affable Henry Kotzé, winemaker, led a Cellar tour before the tasting began.

The cellar was full, Henry explained, due to the bushfires earlier in the year. This meant that the 2015 wines could not be bottled as planned and so, unusually, there were 3 vintages in the Cellar: 2015, 2016 and 2017. Three hundred litre French oak barrels made and toasted by different coopers, were stacked high. Beyond, vast 10,000, 15,000 and 20,000 litre stainless steel fermentation tanks stood shiny bright and tall. These had been designed for minimal pumping, using gravity feeds, to limit oxygen getting into the wine-making process.

Morgenster is an Estate with a long history and many connections. The property was bought in 1711 by Jacques Malan after division of the original property owned by Simon van der Stel. Malan’s family came from Piedmont, Italy, and he named the farm Morgenster, meaning ‘Morning Star’. Fast forward almost 300 years, through building of the homestead famed for its 6 gables, destruction by Phylloxera, subsequent restoration, and to 1992, when the current proprietor bought the farm.

Giulio Bertrand, coincidentally also from Piedmont in Italy, had been searching for a Cape Dutch house in which to retire and fell in love with the property on first sight. Giulio is from the fifth generation of a family business making top quality textiles for the fashion business. Fabric factories in the Eastern Cape are what originally brought him to South Africa. The historic buildings and the farm were restored and the terroir mapped. It showed that the land that could produce exceptional Bordeaux-style wines and olives.

Morgenster produces classic Bordeaux blends as well as single variety wines from the famous Italian cultivars, Nebbiolo and Sangiovese. The mix of an Italian proprietor, a French Consultant (Pierre Lurton, from Château Cheval Blanc, is one of the best Bordeaux winemakers) and South African vineyard and winemaker makes for an enticing blend.

The tasting began with 2 white wines, a Sauvignon Blanc and the White Reserve blend. I rated both equally highly. The Sauvignon Blanc is the first Morgenster wine to utilise a screw cap as it is not made for ageing. The relative lack of oxygen passage, compared to a cork, is less important than for the red wines that certainly are made to age. The Sauvignon Blanc was pleasantly fruity with aromas of warm citrus, guava and pineapple on the nose. These are not the usual descriptors for a Sauvignon Blanc – there were not the typical herbaceous and grassy notes, though some emerged on the palate – and I liked the fruitier style that Morgenster is aiming for.

The lightly oaked White Reserve blend, again unusual in having a high proportion (40%) of Sémillon added to Sauvignon Blanc, was complex on the nose with layers of aromatic honey and honeysuckle with apricot, nectarine and peach stone fruit. This was another highly drinkable wine, bright and dry with good acidity to leave a clean mouth feel.

The Chianti-style Caruso Rosé made from pure Sangiovese was deep pink in colour, with cranberry, red cherry and redcurrant aromas that brought sweetness on the palate that hid dry acidity and soft tannins. Sangiovese dominated (75%) the first red wine too, the Tosca blend made with equal lesser amounts of Merlot and Cabernet Sauvignon. The mix of Italian and French grapes in a blend is also unusual. I foresee this becoming less so as more Italian grapes are planted in South Africa (Sangiovese and Nebbiolo presently account for 0.07% and 0.02%, respectively, of vineyard area). I sense too that Bordeaux blends are making way for more Rhone blends and, perhaps next, Italian or mixed Italian/French blends.

The Tosca, from the increasingly important opera-themed Italian Collection range, was my joint favourite wine of the tasting. The nose was a deeply scented array of ripe cherry, red plum and maraschino with a complexity that followed through to silky, smooth tannins on the palate with hints of dry earthiness. The wine has great ageing potential but I would have to hide it to do so as it is eminently drinkable now.

The single-vineyard Nabucco Nebbiolo, made from just 1.6 hectares of the 40 hectares under vine, is also from the Italian Collection. ‘Nebbia’ means fog because of the mists that surround the limestone hills in Northern Italy. There was nothing cloudy about this wine and I rated it as highly as the Tosca. Pale ruby and light-bodied in appearance, the wine from this thin-skinned grape, has high tannin levels that make it ideal for ageing. Intriguingly, and perhaps surprisingly, the tannins did not dominate on the palate to give a lighter-bodied mouth feel. I liked the adventurous mixture of cranberry, cassis, strawberry, raspberry, and sweet red cherry on the nose.

I have only recently returned to taste Italian wines since moving to South Africa 7 years ago. A year ago I was on holiday in Venice and Rome and enjoyed the Pinot Grigio and Trebbiano white wines. Red wines, I am delighted to tell, are no longer the ‘migraine in a glass’ they once were. I tasted Italian wines just 10 days ago at the Vineyard Hotel that were showcased by the specialist importer, Nobile Collezione. My wine studies too shall soon move from South Africa to the World and so I shall have more chance, nay excuse, to taste more. Today, I felt inspired by Sangiovese and Nebbiolo. I had already been thinking of Italian Wines as a future theme for a Cape Wine Lovers’ Society tasting evening. Indeed, I can do so with grapes grown in South Africa too (Afternote: add Thursday 17 August to your diary).

The 2 final wines were 2013 Bordeaux blends made from the same 4 French grapes that are grown on the Estate. Merlot-based, they contained differing amounts of Cabernet Sauvignon, Cabernet Franc and Petit Verdot. I preferred – but only just – the cheaper (R196), Merlot/Cabernet Franc-led Lourens River Valley to the more expensive (R405) Merlot/Cabernet Sauvignon-led Estate Reserve. That’s unusual for me as I can usually be guaranteed to like the most expensive wine in a tasting! Both wines were elegant with fruity/spicy complexity on the nose and palate. The wine analysis for the 2 wines is near identical. They are both matured for 18 months but more new French oak (60% compared with 30%) was used for the Estate Reserve compared with the Lourensford River valley. This, together with the lighter bodied, less fruity Cabernet Franc grape explains (I think!) my tasting preference.

The wine tasting ended and it was a short drive to the Olive Cellar. Giulio was outside the Olive Tasting Room when I arrived. I asked him where he came from and he replied, “Piedmont in Northern Italy”. I knew where Piedmont was but not, at the time of asking, the amazing historic, geographic connections between him and the first Morgenster owner. Think South African olives and you will think Morgenster. That is no coincidence either, as Giulio is the undoubted father of the olive oil industry in South Africa. He began by importing 2,000 olive trees from several regions in Italy. The first oil was marketed in 1998. Morgenster today has 50 hectares of olive trees that produce some of the world’s best olive oil.

I was fascinated to see how the green and black olives were processed into oil. The new Pieralisi press, all shiny stainless steel with red digital readouts, was fast and efficient. It is one of the most up to date presses in South Africa and built to retain the best flavour and acidity. Now, how often had I heard those words applied to wines too! The Estate laid on a superb buffet of make-your-own bruschettas with the new olive oil, tomatoes with herbs, garlic, cheese and a selection of charcuterie. There was a chance to taste my favourite wines again too.

I was truly impressed by my visit to Morgenster. Wines and olives seem a match in heaven as does the Italian/French/South African combination. The Italian wines reinvigorated my interest in Sangiovese and Nebbiolo and I shall certainly taste more in the future. I could easily have bought so many of the wines but shall return again for that.

Meanwhile, Giulio seems to show no signs of retirement. Like his wines, he was made to stand the test (and taste) of time!