Home/Experience 4.0/How Do You Grow a Vineyard Like Maria? 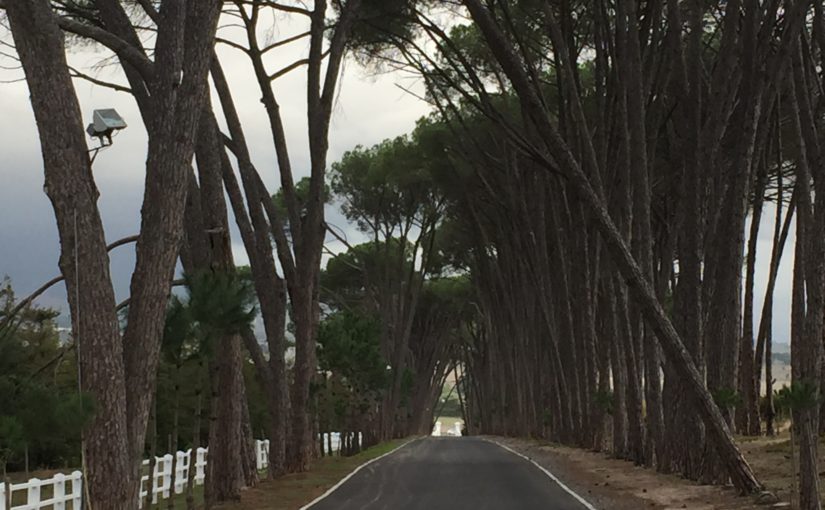 The drive from Clos Malverne to Neethlingshof was barely 10 kilometres. The contrast was far greater than the distance and in so many ways too. The grand, white Neethlingshof entrance gates stood imperious against the grey sky. Ageing stone pine trees lined the driveway for a kilometre, like gapped teeth, and with many younger trees planted eventually to fill the gaps. Signs directed me to a large car park bordered by an ornamental rose garden with low box topiary hedging. All around were white Cape Dutch buildings with their elegant gables, 200 years old and more, with their deep green doors and windows. Clos Malverne, with its unassuming entrance, non-existent drive, and modern Restaurant and Tasting Room felt far away.

I am constantly reminded by the diversity, the originality, and the individuality of the South African wines estates. I am privileged to be able to see these beautiful vineyards in their environment, so much better than choosing their wines off the shelf in a bottle store.

The newly-renovated Tasting Room at Neethlingshof was in the far corner of the courtyard. It was grand and impressive, yet open and inviting, as befitted an estate with a long pedigree and history. Grapes have been grown here for over 300 years. The first farm was known as De Wolvendans, or ‘The Dance of Wolves’, curiously so since the wolf originates from Eurasia and North America. The greatest legacy comes from a woman called Maria Marias who took over the farm in 1813 when her husband, Charles, died. It was Maria who decorated and lived in the glorious homestead that houses the Lord Neethling Restaurant today.

Maria doubled the area under vine, adding 200 hectares to the 197 hectares that she already owned, to make for more than 80,000 vines. She must have been an impressive lady and is presently honoured as one of the Cape’s first female winemakers in the young colony. Her name is given to the Noble Late Harvest wine – simply called ‘Maria’ – which I did not sample today. It was not until 1828, when Maria’s daughter married Johannes Neethling, who became the joint owner, that the farm name was changed to Neethlingshof.

Fast forward to 2017 and the 276 hectare estate today has some 97 hectares under vine. All the major varietals are grown. Red grapes predominate but only slightly so. The estate lies on rolling slopes between the Bottelary Hills and Papegaaisberg. Cooling sea breezes allow slow ripening which, together with careful planting of the different cultivars, enhances their natural flavours and aromas. Neethlingshof is highly committed to sustainability and diversity too, with some 42% of the estate returned to or set aside for indigenous vegetation.

Wines, as I said, are so much more than the content of their bottles. It is time now to turn to the tasting. Elodi was my host for a value-for-money R40 for 5 wines tasting offer. Breadsticks, water and a spittoon were provided. I was hungry and so ordered a brie and beef baguette as I sampled the first whites.

These typically were a Chardonnay and a Sauvignon Blanc. Somehow, in the space of a few kilometres, my tasting radar had failed. The dry, light-bodied Chardonnay with aromatic notes of green and yellow citrus, together with gooseberry, had me think it a Sauvignon Blanc. Worse, I thought the Sauvignon Blanc (normally the easiest white wine correctly to identify) a Riesling. This was on account of an emphasis on warm, stone fruit aromas that followed through onto the palate. It had a clean mouth feel too but was less acidic than I would have expected for a Sauvignon Blanc.

It just goes to show, yet again, that the more one knows about wine the less one knows. I could claim distraction by the Crusaders v Stormers match showing on the television behind the bar but that would be an excuse. Fortunately, the huge tasty baguette and chips arrived and I was able to focus on something else.

The first red fooled too as it was not a wine I was expecting. It was a Malbec (not a Sauvignon Blanc) with good medium ruby to purple colour and dark berry fruitiness on the nose. The tasting note described it as ‘light-bodied’, quite how I am unsure, but also that it was a Veritas 2016 Award Winner. I bought a bottle as it is a varietal not commonly seem.

I muddled up the Cabernet Sauvignon and the Pinotage, mostly as I detected plummy fruits and light peppercorn spiciness in the first glass. I rated the Pinotage higher due to greater complexity on the nose and a better balance between tannin, flavour and alcohol on the palate. The Owl Post Pinotage was the final red I tasted, so called to draw attention to the estate’s integrated pesticide management approach that reduces pesticide use. I liked the rich fruitiness, with hints of coffee and chocolate, and velvety tannins. Before leaving, I sampled a chilled, acidic Chenin Blanc. It was young (2017) with delicate warm tropical notes. I toured too the well-lit cellar with its large oak vats and bountiful racks of smaller barrels.

Neethlingshof, as many vineyards with a long history, has sought to combine the ancient with the modern. The quality and consistency of the wines was apparent as my ‘Likeability’ scores varied remarkably little for the individual wines. The legacy of Maria lives on today. I shall sample the Noble Late Harvest next time I visit and shall raise my glass with a toast to ‘Maria’!