Mixed Spice at the Pinotage Festival 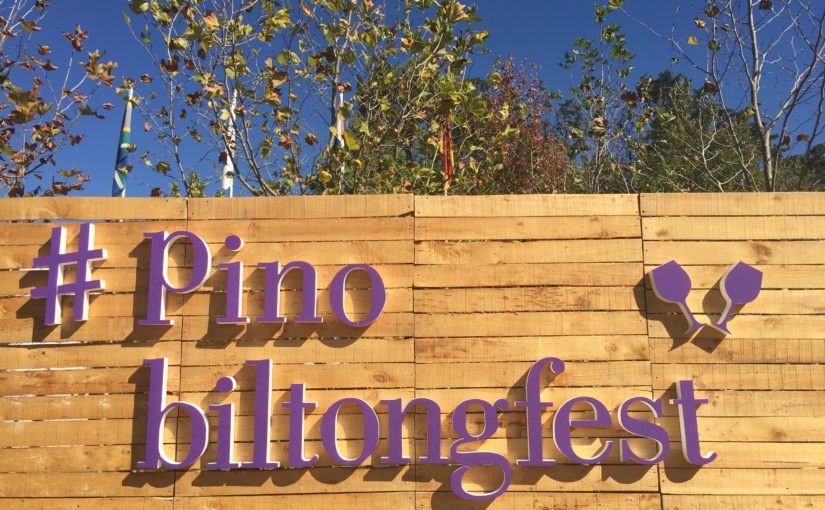 The sun shone brightly today to make for a hot afternoon at L’Avenir estate for the Pinotage and Biltong Festival. The occasion marked 2 firsts for me: my first visit to L’Avenir (I shall return for tasting at a later date) and my first wine festival to feature a single grape variety. Grape `stomping’ at Delheim was a fun season’s opener. Franschhoek Summer Wines and the Pick n Pay Stellenbosch Wine festivals offered broader experiences with several grape varieties.

L’Avenir was easy to find as I had passed the estate just a few days previously between tastings at Glenelly and Simonsig estates. I arrived with my prepaid ticket (R200), collected my ‘complimentary’ glass, tasting guide and small bamboo holder for biltong and made my way to the festival area. L’Avenir made for an intimate setting for this specialist festival. The stands belonging to the different vineyards were laid out on the small lawn beside the dam.

It was noon, an hour after festival opening, and there were plenty of people enjoying themselves to the sound of the 3-piece cover band. Wines from 20 vineyards were on offer and so it was difficult to know where to start. I had tasted wines from few before, Beyerskloof and Anura only, and so I left those until later in the day.

There were sparkling Pinotage, rosé Pinotage, white Pinotage, single variety and blended Pinotage, and even a dessert Pinotage. Most of the wine-growers had brought 3 to 5 bottles and so there was even wider choice. The biltong, in 10 equally dazzling types and flavours, was supplied by Boschendal and Dad’s Choice.

I learned later that one was supposed to pick up a small portion of biltong and then visit the matching wine stall to savour both. I missed that instruction and so my movement between the tightly packed stalls was a little more random – and not because of the amount of tasting! Spittoons and water, both to drink and clean my glass, fortunately were widely available.

I deliberately paced myself to be able to enjoy the wines. In between tasting, I explored the adjacent L’Avenir buildings as well as the Food Court – yummy ice cream supplied by Gelato on the Go in a niftily decorated Ape truck – and other suppliers.

By mid-afternoon, the lawn was packed. The limited ticket numbers made sense or else queues for wine and biltong would have been uncomfortably long. I succeeded, gradually, to sample all 20 Pinotage on offer for tasting. I won’t describe them all as that would not make for easy reading.

Instead, I shall pick out a few that and interested. My favourite of all was the 2014 Altydgedacht Pinotage. The wine was one of the oldest for tasting and much smoother on the palate than most. It was one of 2 bottles that I bought at the festival. I liked too the Dad’s Choice `Geelvet’ Biltong (`Geelvet’ meaning yellow fat and not Vervet monkey!) that was the recommended pairing.

The other bottle that I bought was the white Pinotage from Mellasat vineyards. There are competing claims as to who made the first white Pinotage, as Gizelle from Mellasat explained, but the estate lays claim to the first commercial release. The grapes are harvested 3-4 times in small batches, whole bunch pressed, and the juice immediately separated from the skins to preserve the white colour. Maturation is in 11% new Romanian oak barrels (softer and with more spices than French oak) for 11 months before bottling.

I tasted the wine a couple of times but I remain unsure. It is reminiscent of a Blanc de Noir so far more a white wine than a red wine in style and character. I shall reserve my opinion until I had have the chance to taste fully at home.

Also of interest were wines from regions I have not tasted from or visited before: the Spencer Bay Pinotage from the Oliphants River and Wellington Wines Pinotage. I also liked the Perdeberg Sparkling Rosé (100% Pinotage) which was off-dry to semi-sweet. It tasted sweeter perhaps than it was such is the prevalence for Brut and even Brut Natural wines that are increasing fashionable. The NV Balance Sweet Temptation did not hide its sweetness at all. Trade was brisk at the stall. This was an easy drinker for many, aided by a miserly 8% alcohol concentration.

I finished with a dessert wine, of course, namely the Badsberg Red Jerepigo. Jerepigo is a wine I had not heard of until coming to South Africa and a tasting at Waverley Hills Organic Wine Estate near Wolseley. It was light, sweet, smooth and pleasantly chilled. Last, I collected my thoughts with a coffee in the L’Avenir Tasting Room before leaving.

Shadows lengthened, the band played their final song and the stalls were packing up as I returned to my hot car. The Festival certainly seemed a success by the numbers present and the obvious enjoyment of many. It certainly too showcased many different styles of Pinotage from a wide range of vineyards.

Nonetheless, I left with nagging doubts. Many of the wines, frankly, were not that good. Some were barely drinkable. Most were young, of 2015 and 2016 vintages, and unbalanced. The characteristic fruity, jammy aromas and flavours of red berries, strawberries, raspberries, bananas and cinnamon seemed too often to be in short supply. All too often, acetone overpowered with a tart acidity and coarse tannins. I would have preferred to have sampled fewer wines of a higher quality. I am unsure too what the biltong pairing added – gimmick or crowd-pleaser?

I am well aware of the harm done by British wine critics to the emerging Pinotage industry in South Africa some 20 years ago (I am a Brit too now with SA residency). There undoubtedly have been recent improvements in Pinotage quality and consistency but these were not in great evidence from the entry level wines that most wineries offered today.

I guess opinion on success of the Festival rests on its objectives. If the aim was to promote Pinotage as an adaptable and quality wine – surprisingly, the Pinotage Association was absent – then I question whether the quality of the wines was good enough. On the other hand, if the purpose was to offer friends and family a relaxing, fun time in the sun with a glass of Pinotage and a taste of biltong, then it was an undoubted success.

To sum up, and as my title announces, the Pinotage and Biltong Festival was very much a case of “mixed spice”.