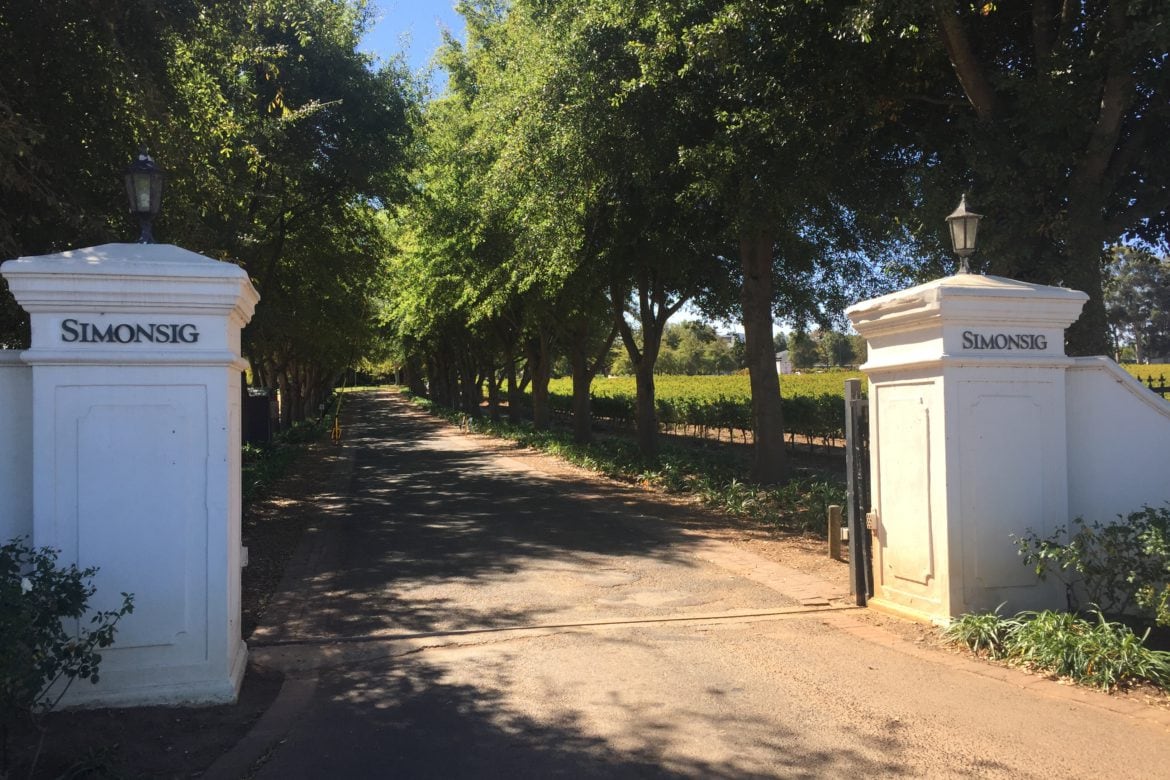 The road from Glenelly Estate to the Simonsig Estate passed many iconic and big name vineyards: Morgenhof, Edgbaston, L’Avenir, Remhoogte, Deux Frères, Muratie, Delheim and Quion Rock, to name just a few. I reflected as I passed by how the well-known estates often disappoint. I am often puzzled as to how the major wine competition awards were won, as if I am tasting different wines to those that were judged. Not all disappoint of course – Groot Constantia, De Morgenzon and Ken Forrester come to mind – and Simonsig didn’t either.

The estate (210 hectares under vine), with its beautiful views over the Simonsberg mountain, is steeped in history. The timeline stretches back to 1688, when the French Huguenot Jacques Malan and forebear of the Malan family that own the estate today, was given land on which to plant vineyards. Fast forward to 1953 and then 1964 when Frans Malan bought properties and started wine-farming on land that forms much of the present estate. The pioneering family members have an enduring legacy: the creation of the Wine Of Origin system; the setting up of the Stellenbosch Wine Route, the first in South Africa, in 1971; production of the country’s first sparkling wine, called Kaapse Vonkel (`Cape Sparkle’), also in 1971, made according to the Méthode Champenoise (later to become MCC); together with in the 1970s the first Rhine Riesling and wooded white wines in South Africa.

Simonsig is clearly not an estate to rest on its laurels. It was but a short drive past the simple gate to the Tasting Room. En route I stopped to admire the views of the Simonsberg beyond the vines with their fading orange leaves. Large sloping signs on the approach lawn reminded too the history. The Tasting Room was spacious and lined with estate bottles and their awards. The stinkwood and yellowwood tables and mellow lighting softened any cold formality to make an inviting welcome.

Tumi was my knowledgeable host and was more than happy to select wines for me to taste. Four tasting options were on offer, more than any other estate I have been to: MCC Tasting (R75), Premium Tasting (R75), Standard Tasting (R50), and The Garland Tasting (R80). The Standard Tasting, of 6 wines, appealed as single cultivars are easiest to taste ‘blind’. I fell on my feet with Tumi – just as I had at Anura Vineyards – as he was another Cape Wine Academy student. He was studying at the Diploma level, the next stage for me, so we had an immediate rapport.

I sensed to a tasting challenge to be set before me. I was hungry and so first ordered the cheese platter (R160). The four cheeses were vast and were very much what I needed before sampling the wines. Tumi played with me with the white wines to begin. I recognised the Sunbird Sauvignon Blanc by its pale straw, watery appearance, citrus and herbaceous aromas, and fresh dry acidity.

I missed the second Sauvignon Blanc – from the to-be-discontinued Adelberg range and so ridiculously low priced at R20 – even though I had picked out light green fruit and citrus aromas. I didn’t detect any real herbaceousness but instead underlying warmer fruits that made me think it an unwooded Chardonnay. Nonetheless, here was obvious value for money and I bought 2 bottles. The Roussanne was not expected and I had tasted once only before, at Ken Forrester wines. Medium straw in colour and with light body, it gave off aromas first of warm papaya and melon which were followed by notes of honey and apricots. The complexity followed though onto the palate to give a creamy mouth feel with a good balance between acidity, intensity and flavour. It was my joint favourite wine of the tasting.

I could not have detected worse with the reds. I don’t know why. Perhaps I am still unfamiliar with wines from the Stellenbosch District or perhaps I was just having a bad tasting day. I thought the Pinotage a Pinot Noir (light in body and more red than purple in colour), the Shiraz a Merlot (pale ruby and mostly red fruits with cedar than spice), the Redhill Pinotage a Cabernet Sauvignon (pale ruby again with a hint of purple, aromas of red fruits over an earthy, woody bouquet, and a peppery favour), and the Cabernet Sauvignon a Pinotage (fruity, plummy, blackberry and mulberry but with medium tannin). If ever there was a case of “the more you know, the less you know”, it was today.

Tumi kindly told me about the annual South African Wine Tasting Championships in Cape Town on 3 June that is a public event, and open to amateurs and professionals. It was not the time to make a decision but, needless to say, I am tempted.

Tumi must have taken pity on me as he brought the final wine for tasting. It came not in one of the numbered bottle sleeves in which he had hidden his wine prey so far, but unusually in an open decanter. It was full-bodied and a glorious deep ruby colour with some gradation to hint at ageing. The primary aromas were red to dark berried fruits – cherry, cassis, and mulberry – supplemented by secondary notes of leather and earthiness, the latter also suggesting bottle age. It was smooth on the palate with medium tannin and acidity. I correctly identified it as a Cabernet Sauvignon – to end on a tasting high – as this was the top of the range 2009 The Garland Cabernet Sauvignon. It was also the most expensive wine I have recently tasted, at R1450 a bottle more than the Vin de Constance at Klein Constantia.

Simonsig was a pleasure to visit. The tasting experience showcased well the estate wines, their legacy, their variety (I sampled the Chenin Blanc just before leaving) and their quality. It will be a long wait until I taste wines ranging in price from R20 to R1450 at one sitting. I left with 2 thoughts in my head, besides the challenges of ‘blind’ tasting. First, I had visited without tasting a single MCC (next time I shall opt for the MCC Tasting and Kaapse Vonkel Cellar Tour).

Second and last, and as I began, Simonsig is an iconic estate that well lives up to its award-winning reputation. It is good to see (and taste) that the Malan family legacy lives on.