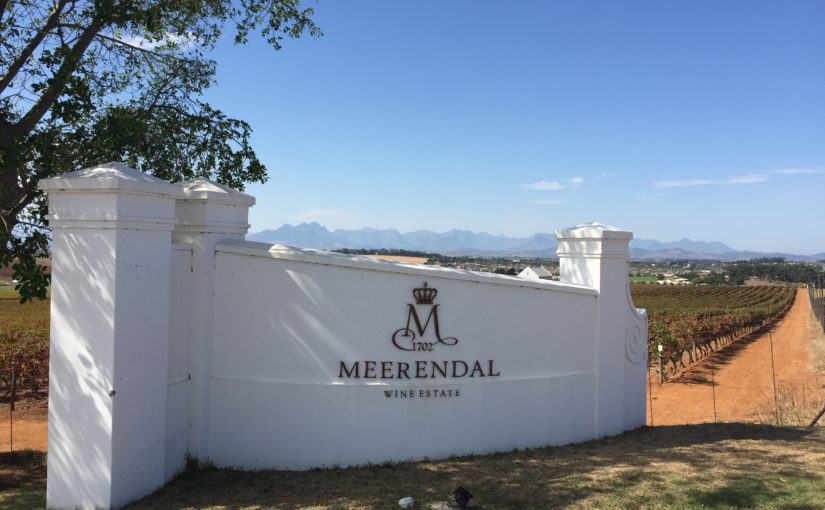 It was a short drive around the gentle sloping hill from the Diemersdal to the Meerendal wine estate, barely 2km as the crow flies but closer to 6km by road. The whitewash painted entrance gate, complete with italic logo above farm name, and the elegant Cape Dutch buildings could have been designed and built by the same craftsmen. Mountain bikers swarmed like flies as I approached the car park. Biking is big at Meerendal. Team Meerendal, in which both amateur and professional riders race in the same team, is big here. The estate hosted the Prologue for the 2017 Cape Epic on 19 March.

Meerendal is big in other ways. The estate has fully embraced ‘vinotourism’, a trend John Platter describes in the Preface of his 2017 Wine Guide in which “traditional wine sampling is now often part of a multi-faceted ‘lifestyle experience’”. I passed the trendy Crown Restaurant and parked below the 5 Star luxury boutique hotel in the homestead Manor House. A sign on the manicured lawn told me that I was not to intrude as it was for ‘Residents Only’.

The Tasting Room seemed an afterthought – strange for a wine estate – as I side-stepped shoppers at the deli and made my way through to the back of the recently-opened Carlucci’s Restaurant. I had to ask my way – again unusual for a wine estate – to the Tasting Room and soon found myself in an art gallery. The walls were full of brightly painted pieces of art in all sizes. I felt I had to be silent in this, functional, soulless, shaded room.

A bright opening up steps at the back of the room drew me to it like a moth to a flame. Inside, beyond a small counter, looked much more interesting and was the highlight of my visit so far. This was the Durbanville Distillery, the brainchild and new venture of father-son duo Robert and Eugene Kleyn. The dual passions of engineering and fine liquor took them on a journey from brewing beer to the fine craft of distilling.

My interest was obvious. Chad, one of 2 tasting hosts and a geomatics student at Stellenbosch University (drinking and studying have always gone together and, perhaps, in that order too), was eager for me to try. I’ll admit I am not a spirit drinker but was easily persuaded on learning about how the craft gin, vodka and rum was produced. The liquors are made by ‘cold distillation’ in which a vacuum is created within the still, called Eve. I did not ask nor see if Adam was close by. Maybe, he was in the Chapel at Meerendal that is available for weddings. The result of this low pressure method is that the boiling point of alcohol is brought down from the traditional 78ºC to 28ºC. This has multiple benefits. Not only is it energy-efficient and promotes efficient alcohol separation but also, importantly, the cold distillation preserves the delicate esterenes and other flavour compounds.

Eve is one of only 3 cold distillation stills in the world (the largest), Chad explained, and glistened with shiny stainless steel pipes. My mouth was whetted and I tasted some of the craft gin. I’ll make a second admission too. I am a sceptic when it comes to the sales speak and rhetoric around new ways of doing old things. I am so with much of the hype around organic wine-making, though Waverley Hills and Silvermist vineyards have convinced me otherwise by their fruity, natural-tasting wines. My scepticism was, however, short-lived. This was gin that actually tasted good! The predominant juniper flavour was laced with other botanicals, including citrus peel, cinnamon, coriander, nutmeg and hidden grains.

Middle-Ages medicine had indeed become tasty and trendy. Chad showed me around the stainless steel fermentation tanks, far smaller than those used for wine-making, in which gin, vodka and rum is made in turn from either wheat or molasses and cane. I was sufficiently bold after to taste a tiny bit of rum, as clear as water. I don’t like rum and this, good as it was, did not change me. I did leave though with a bottle of gin – my impulse purchase for the day.

I needed to eat before tasting and ordered a burger and chips from Carlucci’s restaurant. It was well cooked, seasoned and tasted good. Perhaps the set up at Meerendal was not so bad after all! I returned to the tasting room in good spirit. Tasting of 4 wines cost R30 whilst 3 Prestige Range wines cost R75 to sample. I read after that a Meerendal-etched tasting glass was included in the fee but this was not mentioned by Jackie, my host at the time.

I opted for the basic tasting, ‘blind’, and basic it was. Unsurprisingly, perhaps given all the other attractions, the Tasting Room was empty save for one small group. I tasted 2 whites and 2 red wines. The Sauvignon Blanc was pleasant enough but nothing special. Light on the finish, it was too heavily balanced towards acidity for my palate. This overpowered the herbaceous flavours and green fruitiness that the nose promised.

The wooded Chardonnay was better and best of the 4 wines I tasted. It was a good medium straw to medium gold in colour and punchy on the nose. The wood primary notes were brighter than the fruit ones: woody caramel and honeycomb gave way to baked yellow apple and white peach. They balanced better on the palate.

I rated the Shiraz and Pinotage just 6 out of 10 on the palate. Neither impressed much and the Shiraz just shaded. There was nothing especially wrong with either. They were both one-dimensional and lacking in the complexity I would have expected from wines priced at R170 and R125 a bottle, respectively. The Shiraz needs ageing to round and to reduce the tart finish. I then looked at the label. This is a 2010 vintage wine and so unlikely to improve. The Pinotage was younger (2014) but needs time too to soften the overpowering tannins.

Liza Goodwin, the wine-maker, was the first female winemaker in Durbanville and has been making wine at Meerendal since 1998. I wondered afterwards simply if these wines were her style and one that I just didn’t like. The Platter’s 2017 Wine Guide rates the wines I tasted at 3 stars (the Chardonnay which I enjoyed most at 3½ stars) or ‘Good, for early drinking’. This reassured me.

It will not surprise that I left Meerendal with very mixed feelings and emotions. It undoubtedly has a long history and some beautiful old Cape Dutch homestead buildings. It was busy and bustling with guests and cyclists. Most visitors were not there to taste or buy wines but for other attractions. Meerendal reminded me of Avontuur where the wines also disappointed, possibly at the expense of the equine business. The craft distilling was certainly impressive and was enjoying a brisk trade too.

Cheekily, I wondered too if anyone would have noticed if Meerendal produced no wine at all. Now that is a scary and radical proposition. The wheel of vinotourism at Meerendal may just have turned full circle or, should I say, cycle?