Home/Experience 4.5/King Chenin Kens (Knows) the Wood from the Trees

King Chenin Kens (Knows) the Wood from the Trees 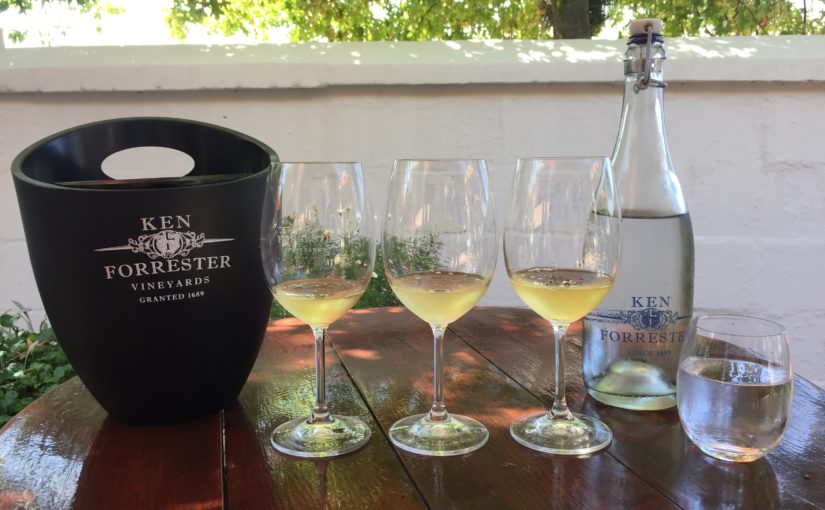 The 2016 Old Vine Reserve Chenin Blanc was my favourite white wine at the Stellenbosch PicknPay Wine Festival and so I was eager to visit Ken Forrester Vineyards. I wanted to see too if I could buy some Chenin Blanc for a Vertical Tasting – comparing the same wine of different vintages – at the April Society tasting evening.

North of Somerset West, just off the R44, and on the slopes of the Helderberg Mountains, I soon found the entrance gateway. I was full of expectation as I drove down the driveway lined with tall conifers. The vineyard and Tasting Room were nothing like I had expected. The vines were planted on flat land and not the slopes I had expected to see. I anticipated a large grand tasting room – as befits a grand, famous vineyard – and arrived to find a small cottage (not the one in the car park). Tasting tables with umbrellas were outdoors beside the low building with the cellar behind.

Nonetheless, I was happy to have arrived and introduced myself to my tasting host, Brent. Tasting was R60 for 6 wines and I explained I wanted to taste blind rather than select for myself from the tasting menu. Brent obliged and soon I had three glasses of white wine before me. I had to try not to over-think my tasting – knowing Ken Forrester’s reputation for award-winning Chenins Blanc – as I went through the tasting methodology that I had recently been taught by the Cape Wine Academy.

These were delicious wines: aromatic and fruity with subtropical notes of stone fruit, some with hints of caramel, others of warm citrus; rich and creamy; crisp, dry and with medium acidity; and with lingering finishes. I was enjoying myself. I was sure the first was a Chenin Blanc. It was lightly oaked (9 months in 20% new French oak barrels) to balance the light fruitiness perfectly.

The second glass was sumptuous too. It had a similar character but showed just a hint of being matured in oak barrels. But was it a Chenin Blanc also? The third white was my favourite and scored a 19 in my tasting assessment and a 9 for ‘likeability’. This too had a smooth creamy, rounded mouth feel that just lasted and lasted. Beautifully balanced, could this also be a Chenin Blanc? Or something else? It is rare to have all 3 wines for a tasting of the same variety.

Brent came over and poured me another glass of white wine. This was a ‘curveball’ he said before he was going to tell me what the first 3 wines were. I wondered if a blend. That seemed most likely as I could not pick it out. It was a straw yellow with hints of green in colour, as if a Sauvignon Blanc. The nose was moderately forward with sweet honey notes layered with peach, apricot and light raisin. This was too fruity and not herbaceous enough for a Sauvignon Blanc but it was the wrong colour for a Chenin Blanc. Perhaps the palate would assist me …. It tasted medium sweet to off-dry. It was not then a Sauvignon Blanc yet it had a crisp acidity. The fruitiness balanced the acidity and an average alcohol level. I was stumped. My guess was an unwooded blend of Chenin Blanc and Sauvignon Blanc.

The time came to put me out of my misery. The first 3 whites were indeed Chenins Blanc. These were expensive wines. The first was the Old Vine Reserve Chenin Blanc that I so liked at the Stellenbosch Festival. The second and third wines, at R950 and R425 a bottle, were the Dirty Little Secret (unfiltered and unfined, hence the name) and The FMC from the Cellar Exclusives and Icon Ranges. Brent had looked after me proudly.

The mystery fourth glass, the ‘curveball’ was a single variety wine. It was a Roussane that I had barely heard of let alone ever tasted. Roussanne is a French Northern Rhone grape, often used in blending, and 0.06% of South African vine area. I had to buy this to add to my growing collection of rare and unusual grape varietals.

I rested and relaxed for a moment before asking Brent to bring me some red wines for tasting. I was enjoying myself. How interesting wine is and how much I have learned. How much more I have to learn too. I read more about the vineyard. The farm is one of the earliest in the area, dating back to 1689 and given by Simon van der Stel to Frederick Boot (later to become Botha and forefather to the family of South African Presidents). Ken Forrester acquired the farm in 1993 after it had fallen on hard times. The first vintage was produced in 1994 and grapes are now sourced from the cool Helderberg Region of Stellenbosch. Many of the vines are over 30 years old.

The red wines proved an equal challenge. I won’t go into fine detail for all. Suffice to say, the first wine set the pace for all in that it immediately puzzled. It was a red-red (as opposed to a blue-red) colour, medium ruby, in appearance. The aromas on the nose were foremost of red fruit (cranberry, red cherry) but with secondary notes of light cedar. Dry and fruity on the palate, it was high in tannin but with a light-bodied mouth feel. It could have been a cool climate Merlot but the high tannin and light-body ruled Merlot out. There was no spiciness for it to be a Shiraz or a Pinotage. Besides, it was light-bodied. The tannin was high but it had not the body or dark fruitiness of a Cabernet Sauvignon (or any other of the Bordeaux grapes). It was too deep in colour for a Pinot Noir ….

I went onto the second glass and that helped little either. I could see some colour gradation that suggested ageing but the clues were much the same. Brent came over and I told him my tasting dilemma. Sensibly, he did not reveal anything but said he would wait until I had tasted all.

By the third glass, I remembered Grenache. This was in the red fruit flavour family and darker in colour than a Pinot Noir. Perhaps the secondary notes showed a little spiciness? I felt I was on the right track but still unsure. The last glass had me sure that was a Grenache, bearing the same light fruitiness and medium tannin levels and intensity. I also recalled that Ken Forrester made good Rhone blends and I seemed vaguely to remember that Grenache too was grown in that region in France.

Brent had surprised again. These were all the same style – but of different ages! This was a vertical tasting, the first I had ever done. Grenache was a player in all but only as one component. The first two were different vintage of the Three Halves wines from the Cellar Exclusives limited availability range – three halves being greater than the sum of all parts. These combined Mourvèdre (earthy) with Grenache (fruity) and Shiraz (spicy). There was no wonder I could not pick out a single variety! I was smugly pleased that I had picked out the ageing though. I was interested to read that Grenache was the major varietal of the third wine, the Gypsy, as this was the glass that I became sure I could taste Grenache.

The tasting was one of the most interesting I had experienced. At the end I saw and tasted the Merlot which I immediately liked (not having to assess and analyse helped!) and decided to buy. Brent had judged my wish for blind tasting and information perfectly. The vineyard was not what I expected but the wines were magnificent. I sensed considerable care has been given to every bottle made to get the very best from each block of vines. Many of the wines were expensive (I didn’t taste any from the R45 Petit Range) and I could easily have bought more whites and reds.

Ken Forrester is one of my top 10 vineyards and I shall look out again, whether at a future festival or for a return visit. I never did manage to buy my 3 Chenins Blanc for vertical tasting in April so I shall have reason to return again soon!