Home/Experience 3.5/Noble Wines without the Rot

Noble Wines without the Rot 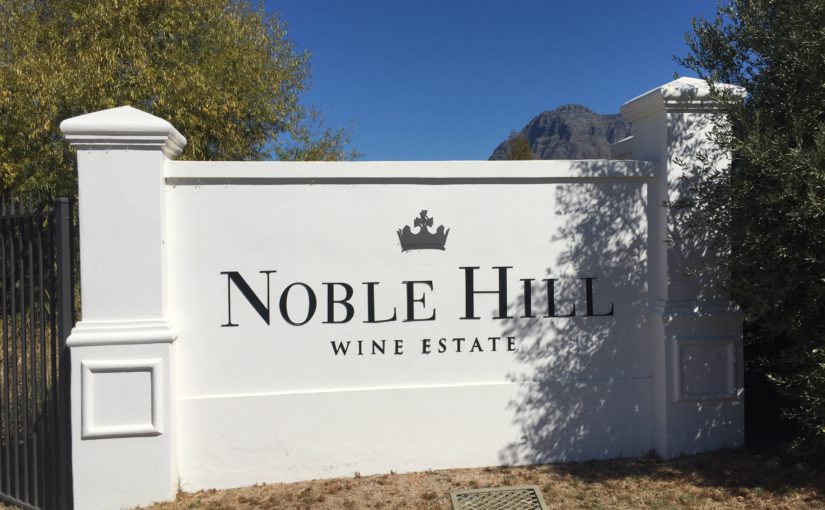 Noble Hill was another estate I had not heard of or whose wine I had ever drunk. I was in the Paarl wine district, it was open for tasting on Sunday, and so I visited. The oak-lined drive guided me to a shady car park. A set of steps led up to the small Tasting Room beside the Latin-inspired, airy Cosecha (meaning ‘harvest’) restaurant. Though late afternoon, the restaurant was still busy but the Tasting Room was less so. The owner’s 2 large ridgeback dogs roamed the room together with a small but still sizeable puppy.

Noble Hill is a boutique wine estate with 30 hectares under vine with a mix of red and white cultivars. There are over 600 olive trees too, of 4 varieties, that are used to produce the Virgin Territory brand olive oil. I was hungry and so I ordered a cheese board before tasting. It came promptly and contained generous portions of tasty blue and Languedoc cheese.

My tasting host was Francina (R40 for 5 wines). Two glasses of white wine were poured ‘blind’ for starters. This gave me a further chance today, having visited Anura Vineyards beforehand, to practice my Cape Wine Academy learning from the Certificate Course. There’s so much detail to think about and write down. The structured tasting analysis helped me to identify a lightly oaked Chardonnay and a Sauvignon Blanc.

Francina told me the owners were from California. I asked how often she saw them and she told me that they are there often. I was lucky to meet the owner, Kathleen. She was friendly and full of smiles. I love to meet vineyard owners and wine makers. I am increasingly conscious that there is as much a story about vineyard owners as there is about their vines and wines.

Kathleen told me that she and her winemaker son bought the farm some 20 years ago. The Tasting Room has been expanded and the restaurant built. The setting is magnificent with a shady lawn leading to a dam. Picnic baskets can be bought to share on the lawn. Kathleen explained how she wanted a Californian ambiance for the Tasting Room. I liked the casual, modern uncluttered style that would not look out of place in a family home.

The cellar was at the back of the Tasting Room and Kathleen kindly showed me around. It was quieter now, she said, with harvesting complete and the new vintages in production. Her wines are sold in equal amounts in South Africa and for export.

I returned to taste 3 red wines. Each one was slightly different in their characteristics and a challenge to assess and to identify the grape cultivar. These were undemanding wines for easy drinking at home, with or without a meal. I preferred the Cabernet Sauvignon to the Merlot, both of which I correctly picked out. The Estate Reserve Bordeaux blend was fruity and with mild spice, with medium-body and with moderate tannin wet grippy tannin. I thought it was a Shiraz but it was the end of a testing tasting day. By the way, the little green pots are spittoons!

I sampled the Mouvèdre Rosé as an extra to finish. I didn’t buy any wines, rare for me, but that was because I had spent enough on wine recently rather than for any other reason. I left contented and wondering what the story was about the logo of the old keys. I read after that these were found in a box when the farm was bought. They proved of little use to open any of the buildings or gates – but have found a noble home to belong to now.