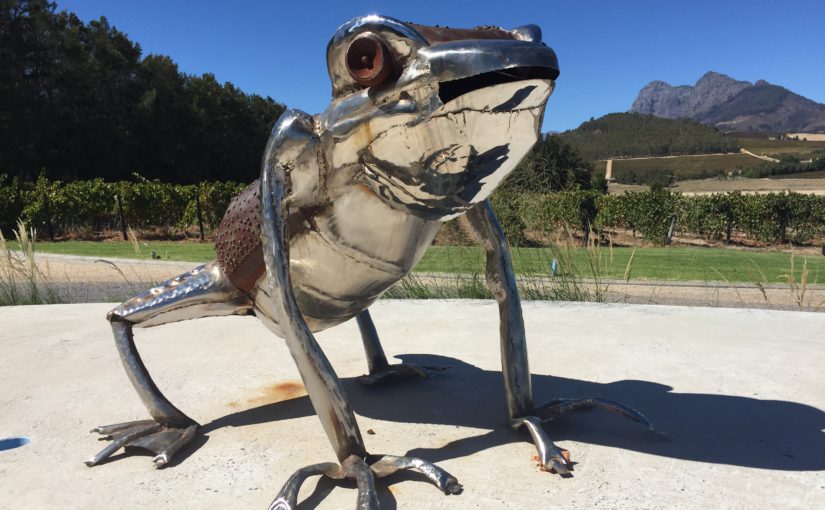 The shiny bullfrog perched on the circle after the entrance of Anura Vineyards surprised. It shouldn’t have. I am an ecologist, a nature guide and a wildlife lover. I know full well that Anura is the Latin for frog. Nonetheless, the ‘light bulb’ moment happened. I knew nothing of Anura beforehand. I had chosen to visit for 2 reasons: I wanted to taste wines from the Paarl area, and the vineyard was open for tasting on Sundays.

The wide entrance and rectangular water features picked out a wine farm that was going places. Imposing and modern, Anura wanted to impress. The long straight road past the Coopery and mostly empty vines after the harvest served only to heighten the anticipation. I parked in shade beside the Tasting Room and found my way inside.

The grand, open Tasting Room was formal yet comfortable. It was busy with tourist guides shuffling round their guests to tight time limits. The expansive facility was reminiscent of Groot Constantia in the Constantia Valley. Only the Red Bus was missing. I could see that Anura was a busy place. I could see why also. Anura has embraced the new trend to offer a lifestyle hospitality experience to all the family. It offers: cellar tours; cheese pairing and tasting; a micro-brewery featuring craft beers; a deli selling charcuterie, Froggit vinegars and relishes; tapas in the Lilypad restaurant; and a Conference complex. It is developing a retirement estate of mixed housing too.

Luck fell upon me as I introduced myself to my wine host, Rallings. A folder was open in front of him which looked familiar. Rallings was a Diploma student with the Cape Wine Academy. I only completed the Certificate course lectures yesterday and intend, on successfully completing the exams, to enrol for the Diploma Course.

Anura was bought by the Bouma family in 1989. Over the next 10 years, it was developed from 2 vineyard blocks into a single entity of 150 hectares of mainly red vines. The first vintage was made in 2001. Beforehand, grapes were sold to neighbouring estates. Frogs are plentiful on the farm that contains an area called Padda Bult, or Frog Hill, that contributes to the vineyard name.

Rallings was booked for a cellar tour but he invited me along. He put into simple words the complexities of modern wine-making. We started where the grapes were sorted on delivery after harvesting and followed the process through the cellar via de-stemming and crushing, primary fermentation, open fermentation bins, pressing, malolactic fermentation, maturation and bottling. I was struck by the scale of Anura. This was a large winery.

I returned to the Tasting Room eager to sample the wines and to use the new and more involved analysis I learned from the Certificate Course. Tasting is R30 (R50 with cheese) and I asked Rallings to bring me a selection of white and red wines ‘blind’. I was confident to let him choose the varietals as he knew where I was with my studies having been there himself some 2 years previously.

Today was my first chance to try out the new methodology to interpret and record the appearance, nose and palate for each glass. It was far more detailed and structured than what I had been using beforehand. I tasted too many wines today to describe them individually here.

Rallings poured me a classic MCC to start with made from Chardonnay and Pinot Noir grapes. I did well afterwards to pick out a Sauvignon Blanc and then a wooded Chardonnay. The new tasting method was involved but, if followed with discipline, seemed to make the conclusion easier and more accurate. Rallings was obviously enjoying being my mentor and teased me with the next glass. I could see bubbles when the wine was poured but they disappeared as I assessed the appearance and nose. But, did I detect a tingling in the mouth? Were there a few bubbles rising in the glass? Rallings had slipped in an easy drinking sparkling white/rosé wine that, he admitted, was a little flat in the bottle.

I tasted 3 reds after – Cabernet Sauvignon and Shiraz from the Signature Series, together with a Pinotage from the Anura tasting range – and with mixed identification success. I didn’t mind as Rallings gave me many useful tasting tips on what to look out for. He ‘played’ with me again by giving me a single variety Petit Verdot. I managed using careful thinking of colour, nose, dryness, tannin level, acidity and fruitiness/spiciness, together with some gentle coaching, to narrow down to one of the Bordeaux grapes but not Cabernet Sauvignon. It made for good practice too ahead of tasting exams in June.

Anura has a reputation for producing robust red wines from New World grape varieties with the complexity of the Old World. The foothills of the Simonsberg mountains contain a wide range of soils, slopes and micro-climates and so offer many opportunities to grow a wide variety of cultivars. I looked at the tasting menu, hidden until now, to see what else I could try out. Wow! There were more than 30 wines listed and the largest range I have seen in South Africa. Many were Platter 4 and 5-star rated award winning wines. My eyes though settled on the minority varieties that I rarely see during tasting.

I could have stayed all afternoon such was the choice of white and red wines to assess and savour. I planned to visit Noble Hill Estate after so I restricted myself to tasting the Grenache, Tempranillo and Sangiovese red wines. I could have bought many bottles too but restricted my purchase to two bottles each of Chardonnay and the Tempranillo. The latter will come in handy when I hold a ‘Little 5 Red’ evening tasting for the Society later in the year.

Anura was a revelation. I had driven past countless times for tasting and courses at Babylonstoren but never really noticed the vineyard. The farm is definitely worth a repeat visit and Rallings hugely impressed. I know now where to buy those rare red wines too. Oh, and I see there’s a Cape Cuvée, Pinot Gris, Viognier and Malbec inter alia to look forwards too when I next visit ….