Big Preparations in the Little Vineyard 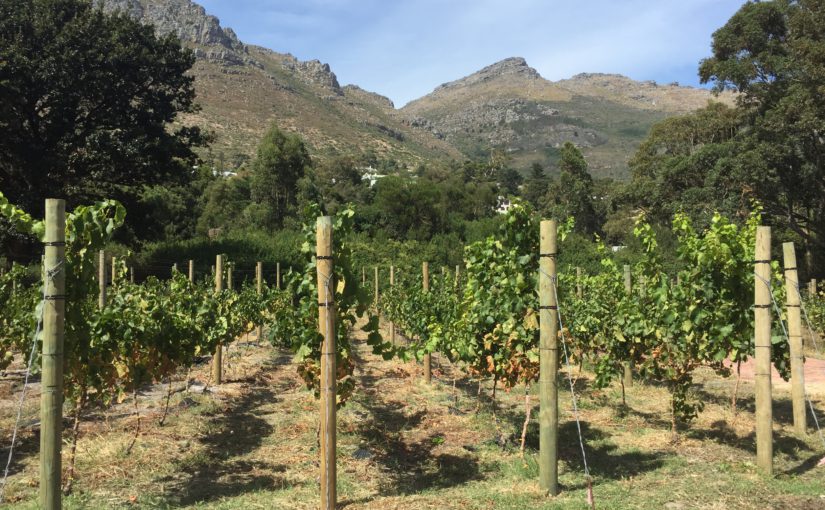 Times are busy at Ambeloui. There’s the first fermentation of the 2017 Chardonnay, Pinot Noir and Pinot Meunier grapes that were harvested in February. More immediately, on Saturday 18 March, Ambeloui is holding the Annual Harvest Festival. This is when limited quantities of the hand-crafted MCC are released for sale. A party atmosphere is promised, accompanied by Greek music and souvlaki served hot off the coals. I am told that space is limited and guests are encouraged to arrive early (opening times are 12pm to 6pm). Stocks generally sell out on the day.

The busy time made me appreciate the visit to Ambeloui all the more. I am taking part in the Cape Wine Academy 3-day Certificate Course until mid-Saturday afternoon so I arranged to see Alex and buy some bottles today, ahead of the Festival.

I was doubly pleased to see this tiny vineyard. I had visited 12 of the 13 vineyards in and around the Constantia Valley/Cape Peninsula (from Steenberg to Cape Point) but not – until today – Ambeloui. Few people in the Southern Suburbs, Cape Town have heard of this specialist MCC producer. This is unsurprising as tasting is only by appointment. Furthermore, the vineyard opens to the public on two days a year only: for the Annual Harvest Festival in March (limited release); and on the first weekend of November (annual release).

Ambeloui loosely translates as ‘little vineyard’ in Cypriot Greek. The name could not be more appropriate as the vines cover barely 0.5 hectares. From the outside, the property could be any home in Valley Road in Hout Bay. Inside, short rows of vines are planted on the shallow slopes. The grapes were picked a month ago and the vines look dry due to the extended drought and lack of irrigation. Alex told me how watchful he is for the leaf roll virus that saps all vigour from plants affected. Diseased plants must immediately be removed to prevent cross-contamination.

The property was bought over 20 years ago by Alex’s parents, Nick and Ann Christodoulou. They decided that if they were going to make wine it would have to be a premium wine and so they ventured into MCC production. The first vines, Chardonnay and Pinot Noir, were planted in September 1995. At the time, Ambeloui was one of the first MCC producers in South Africa.

2,000 bottles a year has grown to 10,000 a year, with grapes bought in from the cooler, maritime Elgin Valley and elsewhere. This is large enough, Alex told me, and allows the traditional French-styled bubbly to be hand-crafted with a level of personal attention that is not possible from a large-scale producer. Ambeloui is very much a family business. Each vintage is named after a family member.

Alex showed me into the small cellar. One side was lined with stainless steel tanks while the other had barrels with airlocks and empty wooden riddling racks for use during second fermentation. Alex let me taste a sample from one of the stainless steel tanks. Barely one month old, the acidity was fresh and exciting and the liquid a dusty, cloudy pale yellow in appearance. It will be many years until the finished product is released for sale.

Activity was busy in the adjacent building. Bottles were being hand-labelled and paper ‘ribbons’ affixed over the wired corks. Ambeloui reaffirmed my particular interest in, and support for, the ‘boutique’, small wine producers. I am struck too by the enormous diversity amongst the 900 or so South African winemakers. Just 3 weeks ago, for example, I tasted at the Waboomsrivier Wynkelder in Wolseley, an industrial scale producer that receives 16,000 tonnes annually from a cooperative of 22 members.

I bought four bottles ‘blind’, without even tasting: two each of the 2014 Cleo MCC and the Rosanna NV Rosé. Alex knows that I shall be putting in a late appearance at the Harvest Festival on Saturday. I greatly look forward to tasting. Who knows, I may even be lucky and meet Cleo and Rosanna too!