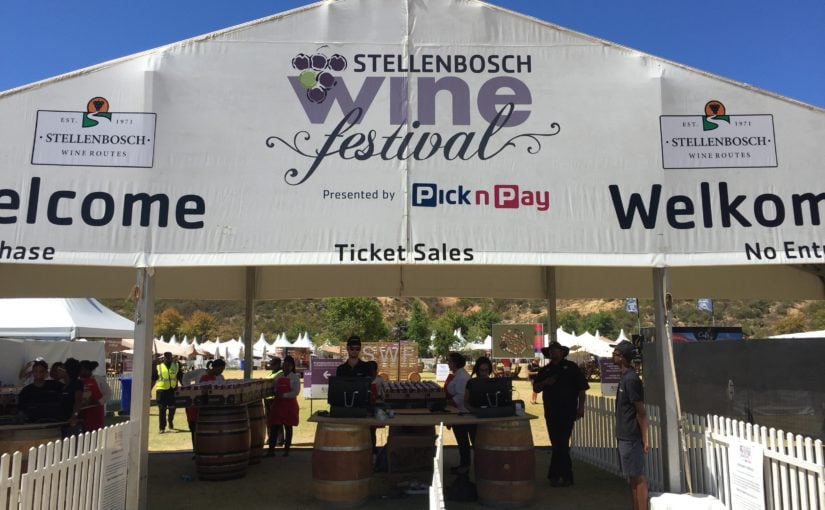 It was a baking hot Sunday afternoon when I arrived at the Coetzenburg Sports Ground in Stellenbosch for the PnP Wine Festival. I was early, like many others, and full of anticipation. I had not been before but I had recently been to wine festivals at Franschhoek (Summer Wines) and Delheim (for grape-stomping). I was interested to see how Stellenbosch compared. I was not alone in wishing for shade netting over the ticketing queue.

Tickets for the three-day lifestyle festival were R190 with additional costs for programmed events in the Wine Library (R150) and Tasting Room (R75). The wine and food stalls were laid out in a large circle neatly displayed on a large map as I passed through the ticket tunnel.

I liked how the tasting stalls were arranged by region: Greater Simonsberg, Stellenbosch Berg, Stellenbosch Valley, Helderberg, and Bottelary Hills. Each region was colour-coded, through to the stand names, price lists and flags above, which greatly helped to find my way around. Within each geographic wine grouping, the estates and vineyards were arranged alphabetically (unlike the more random approach at Franschhoek) which made finding a specific vineyard easy. Nonetheless, I would have liked a festival brochure with my ‘free’ tasting glass on arrival. This was provided at the Franschhoek festival and helped me to navigate my way to the wine estates I wanted most to visit. It was useful too for writing notes on about the wines I enjoyed and wanted to buy.

There was plenty of shaded seating, unlike at Franschhoek, in the middle of the large festival ground. Visitors were soon arriving but not in as many numbers as on the previous days. I was selective in the wines I tasted to start with and picked out those that specially interested. There were other activities too – the Momentum Health Zone for children and grape-stomping – but I did not visit either.

Cashless systems are commonplace at large-scale events nowadays. It is never easy to know on arrival the amount needed. One does not want to leave an unused balance on the card afterwards even if refundable. The queues to top-up were short (I wondered about yesterday) and so it worked well.

The food stalls, fancifully called The Gourmet Lane, were to the right of the entrance. There was a wide selection of offerings. I tasted both a steak roll and, later, cheesy doritos. The staffs were attentive and it was fun to see my doritos being ‘blow-torched’ to melt the cheese.

A wine festival is of course all about the wine. There were over 60 vineyards represented, more than double the number at the Franschhoek festival which, oddly, showcased only white and rosé wines. I learned that each vineyard was restricted to display no more than 5 wines. Thus, despite the number of vineyards present, the range of wines was surprisingly limited. Companies inevitably chose to play safe: two white and three red, or three white and two red. Chenin Blanc and Sauvignon Blanc dominated the whites, with some Chardonnay too. Most were served too warm given the combined effects of the heat of the day and bottle turnover, which meant the wines were not at their best for tasting.

The red grape varieties were primarily Pinotage, Cabernet Sauvignon (or Bordeaux Blend) with some Merlot and Shiraz. There were some gems but they were hard to find. I tasted my first Sangiovese, the 2012 Hercules from Stellekaya, and my first Zinfandel, from Blaauwklippen. I preferred the Zinfandel and shall definitely visit Blaauwklippen which specialises in making wines from this Californian grape of European origin.

I had booked two events. The first was the Pinotage tasting in the Wine Library. R150 was on the pricy side to taste the 6 wines given sponsorship of the festival. The event was well-attended, if a little rushed, but the wines were the highest quality I tasted at the festival. The highlight was the specialist knowledge given by the speaker from the Pinotage Association about the effect of different types of oak barrel: French, American and Hungarian. This was really useful information for me as I study wine with the Cape Wine Academy.

There was time for little more than a snack before the second workshop, hosted by Fleur du Cap, in the Tasting Room. The chef who presented was witty and fast-paced. A seared salmon slice with tartare pieces ‘cooked’ in lemon juice, served on a rice cracker was paired with 2016 Unfiltered Sauvignon Blanc. A canapé sized mushroom arancine with truffle and aioli topping was served with a 2015 Pinot Noir. Best for me was the 2011 Nobel Late Harvest Chenin Blanc that was delicious with a tiny frangipani tart with peach purée. I really enjoyed these tasty pairings – and not just because I was sitting down in an air-conditioned marquee!

Other wines that I enjoyed were the 2016 Overgaauw Sylvaner, another grape variety ‘first’ and the only wine I bought. Mooiplaas brought their 2011 and 2016 Bush Vine Chenin Blanc. It was fascinating to taste both side-by-side. I definitely preferred the older vintage. I much liked the 2016 Old Vine Reserve Chenin Blanc from Ken Forrester, made from vines that are 42 years old. I had not tasted the Pongracz MCC Rosé before either. This was served at just the right temperature, as was the Pinot Noir from Peter Falke.

I stayed until the festival end at 6.00pm. It surprised me to count up the wines I had tasted and they numbered over 30. This ably demonstrated the strength of the Stellenbosch Wine Festival. I was able to sample wines from many vineyards in one location, even if the range of styles and varieties was limited.

The afternoon for me was a mixed experience. There were things I would change and are suggested for the future: a Festival brochure, shade-netting in the ticket lane, wines served at the right temperatures, and a wider variety of wines available for tasting.

Surprisingly, the Festival felt ‘empty’ and lacked atmosphere. There was a definite vibe to Franschhoek – aided by the efforts made by the festival-goers to wear white – but was lacking at Stellenbosch. I wondered why that was. The festival ground was too large for the number attending (it may have been different on the busier Saturday) and the music stage ridiculously large. The stage would not have looked out of place at the Up The Creek music festival. I love and support live music. Manouche were by far the best band and got people up off their feet to dance to their witty, funky songs.