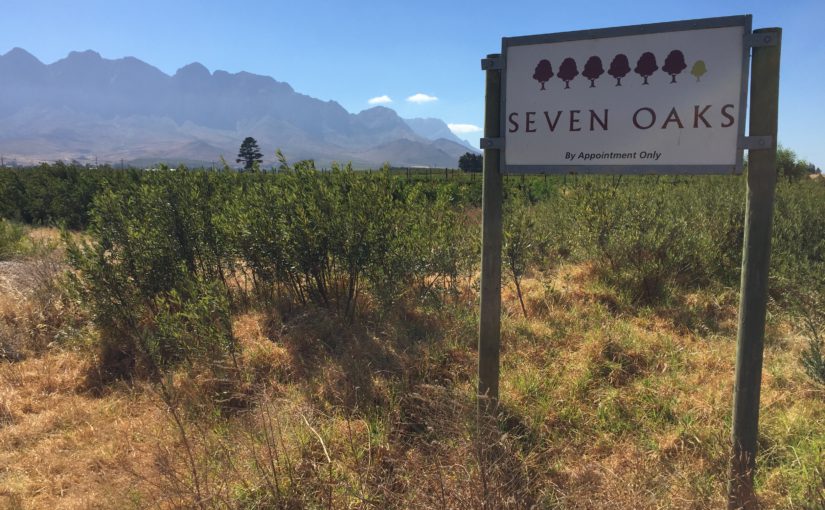 When I was a child in England I would regularly cycle to the local villages. Many had descriptive names containing the local trees: Three Elms, Five Oaks and Nine Ashes. I even used to run cross-country races for my County (aka Province) in a park in a town called Sevenoaks. I thus felt an affinity with this wine estate before I even arrived. It was more tantalising as Seven Oaks was not open to the public for tasting, only by appointment. More intriguing, it was not listed in the Platter’s Guide to South African Wines.

I explained to Jacqui that I was in the Wolseley area to taste wines and to write blogs for the Cape Wine Lovers’ Society, as well as seeking wines for next meetings, whilst my partner was running a social media workshop for the Wolseley Tourist Office.

I had arranged to meet Jacqui at 10.00am and drove through the stunning dry landscape. It was already hot and grapes were being harvested in the fields. I hadn’t seen a mechanical harvester before and stopped to see the workers beside the road. I arrived at the end of the driveway to Seven Oaks Wines a few minutes early but then realised I didn’t know where to go. I followed the gravel road and across the railway and stopped at a farmhouse to ask directions.

I soon found the large family house and waited for Jacqui to open the gate. I was greeted by a gorgeous great dane dog. She welcomed me into her beautiful home and into the living room where the tasting was. There were two house guests, a German and an American tourist, who wanted to taste too. I was immediately relaxed as Jacqui poured the first of two Rosé wines. There is no charge for the tasting.

They were both made from Pinotage grapes, deep salmon in colour and fresh, and strawberry on the nose. The second, the Sahara, was dryer of the two and my favourite. Jacqui explained that the Johannesburg and Durban markets like different styles. Natural grape juice is added the Oasis to sweeten it to make sweeter. These were pleasant unassuming wines that are made to be easily drinkable.

We chatted and as Jacqui cleaned the glasses she told us the story of the name of the farm. It was in 2003 and her husband, Patrick, bought it by auction without her knowledge. She hadn’t seen any details so asked him what it was like. “It has 7 oaks”, he said. But, when she arrived, she saw only 6 trees. I confess I counted them when I arrived and was puzzled to see 6 only. She showed me the young extra oak tree afterwards, to make up to 7 in all.

The bottle labels depict 6 large trees and 1 little tree to tell the story. Much has changed with the 67 hectare farm since they bought it. There are 37 hectares under red and white vines, drip-irrigated, and a further 14 hectares of peaches and pears. Some of the old peach trees are being stripped out to make room for more vines.

We sample the two 2016 white wines next: a Chenin Blanc and a Sauvignon Blanc. These are ridiculously cheap wines compared with the prices I usually pay in the Constantia Valley in Cape Town. I am fascinated to taste and to learn and experience the Wolseley wines. These are simple fruity wines too, dry and crisp. The finishes are short but that doesn’t surprise.

Three reds end the tasting as Jacqui explains how the mechanical harvesters literally shake the grapes from their bunches. They are increasingly common since the farm workers strikes of 2015. The 2012 Cabernet Sauvignon/Shiraz precedes the 2011 version. The two wines are made slightly different: the 2012 wine has a 60%/40% mix and has been in tanks seeded with French oak chips for 6 months; the 2012 blend has a 70%/30% mix and has been matured in French and American oak barrels for 18 months. Surprisingly, I preferred the younger wine and enjoyed the sweet plum, blackberry and mulberry nose and spiciness on the palate.

Jacqui had left the best until last. The 6+1 Pinotage was my clear favourite. Medium-full bodied and a deep garnet red in colour, it invited me to explore more. The red plum and dark cherry fruitiness was pleasantly matched with a spiciness of white peppercorns. I haven’t drunk much Pinotage as it is little grown in the Constantia Ward. The palate did not disappoint. It was lower in tannin and smooth in the mouth. It was easy to see why this wine was a Veritas Bronze award winner in 2012.

Jacqui could not have been more patient, generous with her time and hospitable. Her passion was obvious and that showed too in her wines. I bought 2 bottles of the Chenin Blanc, a steal at a reduced price of R20 each, together with a bottle of the Pinotage. She showed us the wine cellar after, perhaps to be developed at a later date. On leaving, she asked each of us which open, tasting bottle of wine we would like to take with. I took little time to ask for the luscious Pinotage!

Seven Oaks set the bar high for my first tasting in the Breedekloof Wine District. I was introduced to a new style and value of wine. As I left and drove back down the gravel road and towards the single-track railway line, a jackal buzzard circled overhead. It was as if my initial welcome to this beautiful area was completed.

I had tasted 7 wines at Seven Oaks -and what better way to start my first wine tour!