Home/Experience 3.0/Tasting Vines at the Vineyard

Tasting Vines at the Vineyard 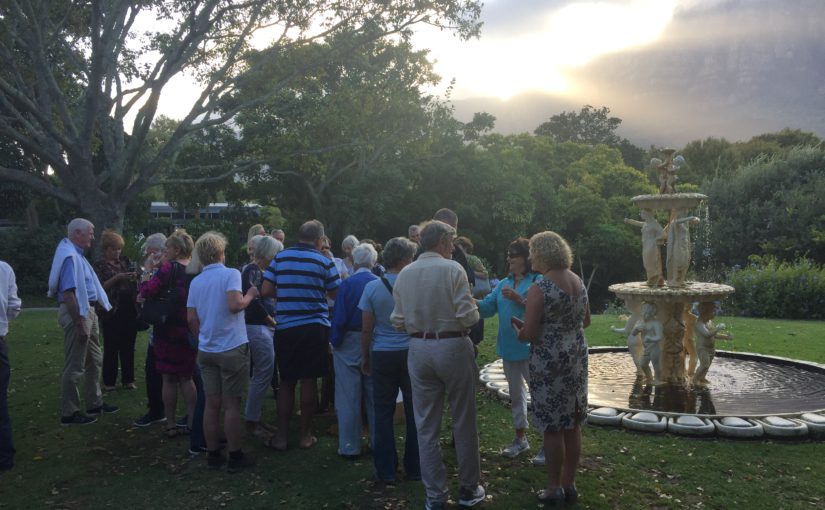 The last of the sun’s rays were doing their best to give a little warmth on the lawn at the back of the Vineyard Hotel in Newlands in the Southern Suburbs, Cape Town. The wind had at least died down. I had known for a while that the Vineyard Hotel offered wine-tastings on a Monday evening from 6-7pm. Somehow, life had got in the way and it was not until today that I was able to go.

It was easy to see where the tasting was on the lawn facing the Eastern Slopes of Table Mountain. There was a tight gaggle of people gathered around a small table and spilling out onto the surrounding lawn. The wines tonight were from Stony Brook Vineyards, a small family-run farm located in the Southernmost end of the Franschhoek Valley.

Five wines were available for tasting: two white and three red. A glance at the Platter’s Guide makes interesting reading. Tasting is by appointment only. The estate is relatively small with just 14 hectares under vine and grows twice as many red as white grapes. Nonetheless, it produces 20 different wines across all the styles from MCC to dessert. These are highly-rated. All but one of the assessed wines have been awarded a Platter 4-star rating or higher.

It wasn’t an easy or a relaxed environment to taste. I had sympathy for the one, patient server from the estate who was trying both to serve and explain the different wines. I much preferred the second white I tasted: the Ghost Gum White. This was an interesting blend of Chardonnay and Sémillon aged in 50% new oak. The deep yellow colour showed the oakiness even before taking in the nose. It was bold and creamy on the palate and layered with citrus and honey. I would have bought a bottle had it been for sale. The Sauvignon Blanc that I tasted beforehand was personable but didn’t hit quite the spot. I have tasted better elsewhere.

The red wines were a classic selection: a Rhone Blend, a Bordeaux Blend and a Cabernet Sauvignon single variety wine. The Shiraz/Mouvèdre/Viognier blend was cherry red in colour and red-berry fruity on the nose. The mouth feel was too coarse for my liking with sharp tannins showing through from the 28 months spent maturing in oak barrels. This wine will likely improve with age.

The Max, named after the farm Jack Russell, was a classic Bordeaux blend. Made from 4 different grape varieties, it also has been aged for 28 months but in a mix of 50% new fill and 50% second-fill French barriques. It was an improvement on the SMV and I liked the blackcurrant fruitiness. It has been made for ageing and this shows.

My favourite was the final red, the Ghost Gum Red. Incidentally, the name comes from the 150 year-old Ghost Gum tree that is visible from the farm’s tasting area. This flagship Cabernet Sauvignon is made from heavily-pruned bunches to concentrate flavour. It was deep, intense ruby in colour that heralded a rich dark cherry and blackberry nose accompanied by a complex, balanced and lengthy finish. Though aged for 32 months in new French barriques, the tannin seemed less astringent. This too will age and is a wine I would readily buy as an investment to drink in 10-15 years. Meanwhile, this was a wine to be drunk with hearty roast lamb or an Indian curry rather than alone.

The sun faded and I left. The wines were much better than the tasting experience that was a disappointment for a venue of such high standing as the Vineyard Hotel. There were simply too many people chasing too few wines in quick succession for an enthusiast to savour.

I shall be making an appointment to taste the wider range of Stony Brook wines in more peaceful surrounds in the not too distant future.