Home/Meetings/Grape Fun with Chardonnay and Shiraz

Grape Fun with Chardonnay and Shiraz 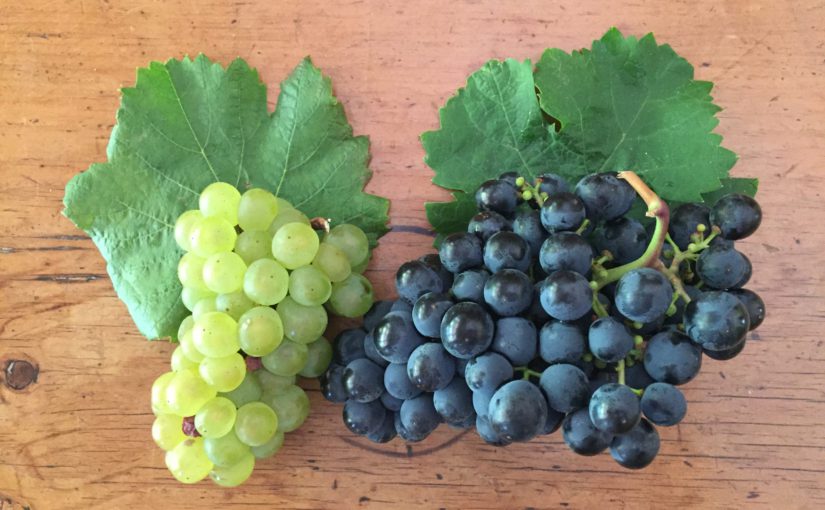 The Argentinean Chardonnay was the winner of the night. It was the last of the four Chardonnays but stole the show by popular acclaim.

This was the third meeting of the Cape Wine Lovers’ Society. It was great to see some familiar faces as well as new ones. I had prepared well for the evening and was really excited. I was looking forwards to sharing two major grape varieties – Chardonnay and Shiraz, 5th and 6th most grown in the World – in more detail.

It was fortuitous timing that I was able to obtain grapes of each variety to show (thank you, Constantia Uitsig) as both varieties shall soon be harvested. It was a great opportunity to see and taste the small, super sweet, thick-skinned grapes from which the wines are made, and something rarely done at a wine tasting.

The MCC  Chardonnay from the Steenberg estate was light and refreshing. It made the perfect opener to taste but not the best wine to explain the intricacies of wine-tasting and scoring. I spied some glasses already near empty even before I had finished explaining how to record the nose and palate.

It mattered not as the evenings are for sharing and fun. I followed with two wines of different styles from the same estate: a 2015 unwooded Chardonnay and a 2014 wooded Chardonnay from Constantia Uitsig. This gave as close a comparison I could find to show the effect of oak on Chardonnay. Opinions differed, as they should with personal preference, as to which tasted better.

I sensed a slight preference for the unwooded variant and this was confirmed by the Lagarde unwooded Chardonnay from the Mendoza Valley in Argentina. My original plan was to showcase a heavily wooded Chardonnay from the Sonoma or Napa Valley in California but American wines are not easy to source in Cape Town due to their high cost. I prefer to offer wines from estates that I have visited but this was obviously not possible for this Argentinean wine. It was a delicate pale lime-yellow colour and with a complex nose. We could detect an herbaceousness, flinty, tropical, asparagus and citrus notes. It didn’t seem to fit any pattern I had experienced before. The acidity and crispness meant that it could have been a Sauvignon Blanc – but then it had warmer tropical notes too – with a luxurious mouth feel with a hint of butteriness. The complexity remained long in the mouth. This was a special wine to savour.

The three Chardonnay styles – MCC, wooded and unwooded – gave me a good excuse to share many other topics in passing. These included: serving temperatures, the difference between sparkling, MCC and French champagne wines, origins and benefits of the flute-shaped glass, how to store glasses, and food pairing. I really enjoyed the cut and thrust of conversation and questions, together with the many comments on colour, nose and the palate.

The evening was flowing well and we had a short break before sampling four different Shiraz. As with the Chardonnay, three were from South Africa and the last from abroad. The full-bodied, spicy aromatic Shiraz is served at one of the warmest temperatures for wine, at close to 18°C. We began with a Syrah from De Morgenzon – and, yes, Syrah (Old World) and Shiraz (New World) are synonymous – and a Shiraz from Delheim. The Shiraz family traits were evident but these wines were subtly different, with the latter showing the weight of more time spent maturing in oak barrels.

The third came from another favourite vineyard of mine and one I shall be visiting again soon: the organic Waverley Hills. The organic label can so often be over-used but there is something special in the viticulture when it comes to wine. Plummy, fresh and full of life and flavour, this was a wine that was ordered after.

We finished with another highlight – the Barossa Valley Shiraz from the Patchwork estate. I wanted to showcase a Shiraz from one of the top growing areas in the World and so excited too to taste for the first time. It was distinctly different from the South African Shiraz. It was full of lively fruitiness but with an earthy complexity that made it interesting. The nose followed though to a silky smooth palate with matched tannin complexity through to a long finish.

We rounded off the evening with a selection of cheeses to match: semi-hard and soft creamy cheese for the unoaked and oaked Chardonnay, respectively, and goat’s cheese for the Shiraz. It was time to relax and taste a little extra of our favourites from the evening.

There was another winner on the night too. It was the perfect blend of good company, invigorating conversation and good learning to accompany all the wines …..