Classic(al) to Barrique – De Morgenzon Hits all the Right Notes 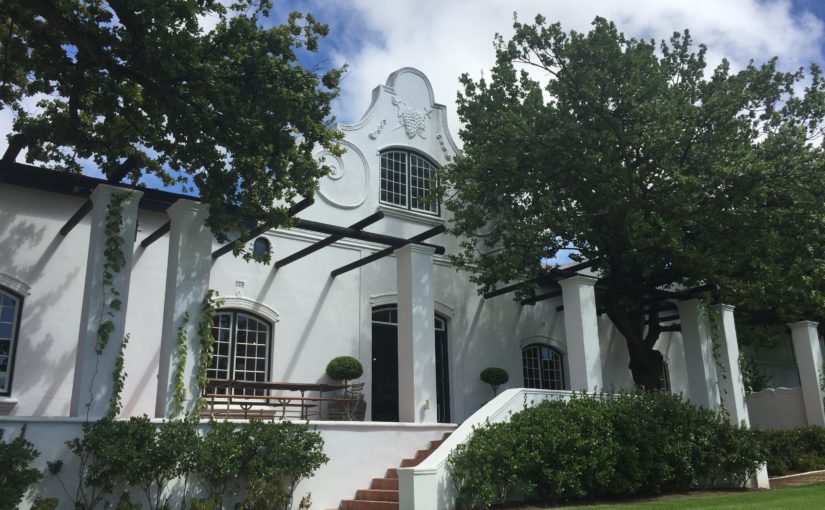 De Morgenzon is not the easiest vineyard to find. I had been here before for tasting. I wanted to return for a cellar tour ahead of the forthcoming Cape Wine Lovers’ Society meeting on 16 February. I called the landline several times, the only published number on the website or in the wine guides, to check on weekend opening times and to arrange the tour. Calls went straight to voicemail with the recorded message telling me that De Morgenzon was open only on weekdays from 10am to 5pm. This confused as the guidebooks advised that the estate was open daily. My partner and I took a chance and decided to go anyway, hoping it was open.

Fortunately, I was using GPS because even when close by there were no road signs off the M12, West of Stellenbosch, for De Morgenzon. The first sign I saw was 5 km away on the narrow road along the Stellenbosch Kloof Valley. Interestingly, the first road from Cape Town to Stellenbosch ran through this kloof.

Old bush vines heavily laden with red grapes lined close to the edge of the road. Pomegranates were growing too with early ripening fruit tied in paper bags. High on the hill to my right I could see a large property, possibly the owners’ house. This, together with the occasional cedar trees in the surrounding vineyards, made the landscape look very reminiscent of France or Italy.

This apparent secrecy adds to the mystique of De Morgenzon. It is oft-described as ‘a garden with vineyards’. It is easy to see why. Red canna lilies in flower bordered the approach road to the large white entrance gate posts. The driveway up to the house and tasting room was lined with oak trees. At the top, trimmed lavender bushes grew at the end of the vine rows.

Fifty-five hectares of the 91 hectare estate are under vine, rising from 200m to 400m and with panoramic views of the surrounding mountains. Much of the remaining space on the farm is put to restoration of the Renosterveld or to repeating swathes of primary and secondary colours.

We walked to the tasting room past a block of Chenin Blanc, wired tall, but with the grapes already having been picked. Later, I heard that these were already being processed for the MCC.

There was a private tour in the tasting room and so I asked Taylor, our tasting host, if we could sit outside on the stoep so we did not overhear for our ‘blind’ tasting. The view overlooked a manicured lawn and tidy gardens and to the mountains beyond. It was windy but the sun was shining. This was particularly fitting not only because of the origin of the farm name but also since it was raining when we left Cape Town. De Morgenzon means “the morning sun” and the estate is the first part of the valley to see the sunrise.

We opted to share a single full tasting (R125 for 9 wines, waived with purchases over R300). Taylor brought us the wines in pairs. The wine glasses were beautifully etched with the DMZ brand logo. The water tumbler was too!

Our first tastings were a Rosé and three white wines. It was immediately clear that De Morgenzon wines were of the highest quality. I rated these wines, each very different – a Grenache/Mouvèdre/Syrah blended Rosé, a Sauvignon Blanc, a Chardonnay, and the Maestro white blend – with 17-19 (out of 20) points. These were some of the highest scorings I have given.

The great was soon to become better. We moved inside after the tour party had left to be out of the wind. Baroque classical music quietly played to give a sense of serenity to the grand and beautifully decorated tasting room. As I waited for the next pourings, I read that the owner (Hylton Applebaum) is the founder and Chairman of Classic FM.

This fine attention to detail is evident throughout De Morgenzon and obviously has been given much thought. I noticed the stylish bottle labels in pretty pastel colours set against steel engraving scenes and lettering. The wines were named after musical terms such as ‘Maestro’ and ‘Concerto’. The toilets, even, were wallpapered with musical scores!

I digress. The next wine I tasted was the 2016 DMZ Chenin Blanc. It mattered not that I thought it a Sauvignon Blanc for it was the first wine I had ever scored with a perfect 20 – and also a perfect 10 for ‘likeability’. Crystal clear, green-yellow and grown from 35 year-old bush vines, it had a strong and defined nose of peach, pear, grass and lemon. The palate matched the nose flawlessly. It was crisp but not too acidic and bold in the mouth, rare for a white wine.

The final two white wines were from the top-of-the-range Reserve Collection, one a Chenin Blanc and the other a Chardonnay. Both scored very highly too. I scored the Chardonnay (which Taylor allowed us to taste, albeit it was not on the tasting menu) a 20/20. Here was a second highest score! The Chenin Blanc was very close and of similar high quality. Taylor explained that the Chenin Blanc was one of the highest internationally award-winning Chenin Blancs in the world. This experience led De Morgenzon to enter the Reserve Chardonnay into similar competitions. It finished an even higher winner – Platter 5-star too – to beat 16,000 other wines, as assessed by 18 acclaimed ‘blind’ judges. It is one of the very best Chardonnay in the world.

We ended with four red wines and a dessert wine. My favourite was the DMZ Grenache Noir – and not just because I correctly identified the grape variety! I liked the red-cherry fruitiness and mild spice on the nose, with a medium-body that matched the silky medium tannin. This was another wine to buy!

I especially wanted to taste the DMZ Syrah as I had chosen it for the ‘Chardonnay and Shiraz’ Cape Wine Lovers’ Society tasting on 16 February. This too excelled as did the Reserve Syrah that followed. I shall leave the description for now but shall post with the meeting review.

The tasting ended with the red Maestro blend and the Vine-Dried Chenin Blanc dessert wine. I suspect that neither of these was on the tasting menu. Taylor, a Masters student at Stellenbosch University, had looked after us exceptionally well.

Afterwards, we wandered to the vineyards at the back of the tasting building. Baroque music was playing from a speaker high on a pole between the rows of young Chardonnay vines and heavily-laden Shiraz vines. Vineyard music is unique to De Morgenzon and certainly a strange experience. Research has shown that classical music can have positive effects on budding, root growth, and fruit size. Baroque music, with its melodic, rhythmic and mathematical patterns, is deemed to have been created with the highest order and harmony. More detail can be found on the De Morgenzon website.

De Morgenzon was well worth the mildly annoying struggle to check opening times and to find the estate. The cellar tour was not possible due to the MCC production which was understandable. I would have liked a cheese platter to have filled me after the extensive wine-tasting (we sampled 12 wines, more than the 9 on the tasting menu) but there is none. (Afternote: we went to the Jordan Wine Estate after, just 500m up the valley, and shared a tasty cheese platter).

The quality of the wines and the attention to detail were what stood out for me. The cool ripening conditions and granite-based soils produce world-class Chenin Blancs. The other De Morgenzon wines, whether from the DMZ, Maestro or Reserve ranges, are all of the highest quality and standard. The estate lets the wines speak for themselves. It is a place for the wine enthusiast. If you wish for a family or novel tasting experience with imaginative food pairings, then De Morgenzon will not appeal. If you wish for a tasting experience guaranteed with excellent wines, then come here.

For me though, De Morgenzon and its wines hit all the right notes!