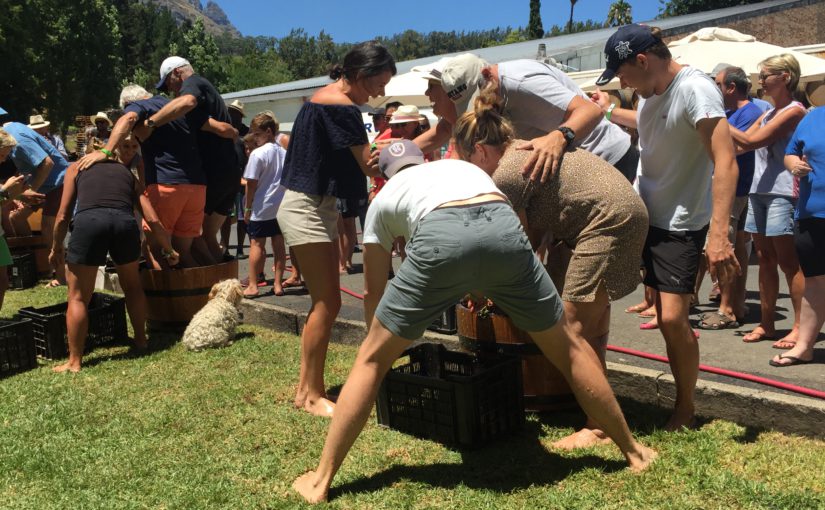 I visited Delheim, to the North-East of Stellenbosch, for the Harvest Festival. Delheim holds one of the first wine festivals in the region to usher in the grape-picking season. This was the first time it had been held for two years as the 2016 Simonsberg mountain fire put paid to the event.

The approach road to the estate led up a windy road with glorious views of the surrounding mountains and vineyards. It was good to park under the shady trees. The walk through the entrance, with painted old farm machinery on display, gave clues to the historic pedigree of this family-owned wine farm.

The Simonsberg is named after Simon van der Stel, the first Governor of the Cape, who granted freehold to the land to Laurenz Kamfer, a German, in 1699. Originally a citrus farm, the first grapes were planted in 1940 and the German history remains to this day. The unusual concrete tanks in the cellar were built in 1944 by German prisoners-of-war as the import of new machinery was prevented by the war.

The name ‘Delheim’ comes from the German ‘Deli’s home’ and named after the wife of the then owner who bought the farm as a retirement home. It was just after the war that the owner’s nephew decided to join the family and to help out on the farm. This was the legendary Michael ‘Spatz’ Sperling – ‘spatz’ means ‘baby sparrow’ – who arrived by boat in 1951 with a mere £10 in his pocket.

Besides developing the estate and pioneering wine-making through trial and error, Spatz developed wine tourism. Delheim was one of the founders of the first wine route in 1971 together with Spier and Simonsig estates. The Stellenbosch Wine Route now has over 200 members.

We arrived without tickets and walked though the shady courtyard with ancient oak trees and ivy-covered buildings. We were greeted by signs advising that the festival was sold out, feeling most disappointed as we had travelled some distance from Cape Town and wanting to enjoy some grape ‘stomping’.

The walkway led through the cellar containing the vast concrete tanks and extra large oak vats. It was chilled cool that gave a welcome respite from the outdoor heat. This was no modern stainless steel cellar and again a reminder of the historic importance of the Delheim estate.

We took our chance at the arrival desk and, fortunately, tickets became available. Our upset was short-lived and very soon we were enjoying a glass of delicious, chilled, sweet, coral-coloured grape juice.

Many festival-goers had already arrived and were sitting around the upturned half barrels in shade under trees surrounding the sloping lawns. Music was playing, simple snack lunches were available, and the bar was open. Our welcome juice soon ran out and we bought glasses of the refreshing and all-too-drinkable Pinotage Rosé.

The grape stomping had already started so we put our name down and waited our turn. There were 4 barrels with teams of 6-8 people stomping fast to extract as much juice as they could from the Shiraz grapes.

Half an hour later it was our turn. We took off our shoes and socks and introduced ourselves to our colleagues on ‘Team Groovy’. We had three minutes to run 100m to collect two crates of grapes and to press as much juice as we could with our bare feet. It was surprisingly tiring and we made sure all had their turn. Whilst not ‘stomping, we either supported our new-found friends on our shoulders or removed the stems from the cloudy warm liquid.

The call to stop was sounded and the juice and crushed grapes from each team was separated in tanks beside the lawn. Team Groovy came second with over 13 litres of juice. Needless to say, the juice is not used in any wine-making! We washed our legs off with a hose after. It was surprising how sticky the juice was and I only really came clean in a shower at home after.

We bought a tasty ice cream and watched the barrel-rolling around a u-shaped route. It looked hard and was more difficult than it looked. The music played on, complete with a melodious saxophonist, while couples challenged each other to giant jenga on the lawn. It was difficult not to enjoy the occasion and well worth the R100 entry fee.

My partner had been to Delheim before for wine-tasting so we retraced our way through the cellars to the tasting room. The ‘Downstairs’ cellardoor, complete with famous cobwebbed window, is beautifully laid out with little alcoves decorated with historic artefacts to provide intimate and relaxing surroundings.

The extent of the Delheim range of wines became immediately apparent. All but one of the 16 wines – from MCC to white to rosé to red to dessert – were available for tasting. We could choose between the R25 Standard and R50 Premium tasting, depending on whether the Vera Cruz and Edelsplatz were included. Bottle purchase waived the tasting fee.

Delheim has two mountain properties farmed as one: the Delheim estate and the Vera Cruz estate 3km away to the West. Delheim covers 36-50 hectares and is planted with white varieties: Chenin Blanc, Chardonnay, Sauvignon Blanc and Weisser Riesling. The vineyards lie on slopes at 320m to 480m above sea level at the foot of Simonsberg Mountain. They are unirrigated with slopes of decomposed granite.

The larger Vera Cruz estate, 85-100 hectares, is at lower altitude (190-350m above sea level) and is partially drip-irrigated. Red grape varieties, grown on bush vines, predominate and include Cabernet Sauvignon, Merlot, Pinotage and Shiraz. The lower rainfall and more weathered granite soils, that hold less water, are ideal for flavour and tannin development in the berries.

We shared a Standard and a Premium tasting to sample wines from both estates. I didn’t bring my tasting sheets for the festival and so it felt like a holiday not having to make thorough notes for each glass. Pauline was our attentive host and enjoyed serving us our wines ‘blind’, something she was rarely asked to do. She could not have been more pleasant and helpful.

We enjoyed almost the full range! I asked to compare the different single white and red grape varieties alongside each other: Sauvignon Blanc, Chenin Blanc and Gewürtztraminer, and then Cabernet Sauvignon, Shiraz and Pinotage. In between, we tasted the Rosé – the first made from Pinotage grapes and now in its 41st year – and the brut MCC Blanc de Blancs made from Chardonnay.

We were spot on with our white and red grape identifications, without knowing in advance the cultivars, which restored my tasting confidence. We finished with the infamous – or is it famous? – natural, sweet Spatzendreck dessert wine. The story goes that on one particular Sunday afternoon, between sauerkraut and swimming, Spatz led his friends to the cellar to taste his latest wines. One was heard to remark after tasting a particularly flawed sample, “Oh Spatz, this now is really dreck! (German: ‘sh*t)’”. Spatz was consoled by a friend who said, “Try again, succeed and call it Spatz’s dreck”. Years later and having mastered the art of wine-making, Spatz labelled the wine with an ‘ennobled’ sparrow pooping into the cask. It won the ‘worst label award’ in 1971 to give it dubious distinction.

I enjoyed the wines and the tasting enormously and all the more so being able merely to experience. We bought five bottles across the range for ourselves and a further 6 bottles of Rosé for our friend.

We left Delheim, my first time at the family estate, having had a fun and outstanding day out. The festival gave me my first, memorable, grape ‘stomping’. That alone made the entrance fee worthwhile, and a free wine-tasting was included after.

I greatly liked the wines that offer good value for money. I could easily have bought more from the extensive selection. I shall certainly visit again, and before next year’s festival, and shall look forwards also to sampling the Garden Restaurant.

Delheim Wines did more than live up to its historic heritage. It was exceptionally well ‘worth the journey’.