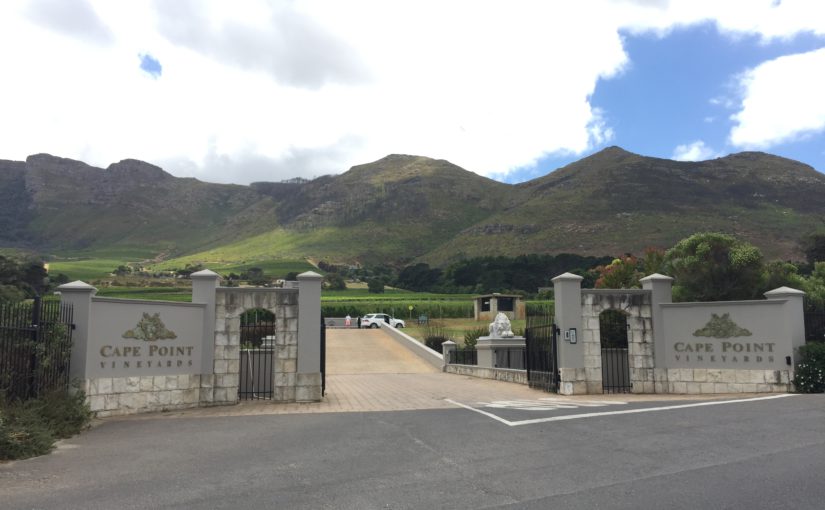 Cape Point Vineyards has been high on my list of places to visit for a while. I have visited the Thursday Market on many occasions but not been for a wine-tasting. Located near Noordhoek, the estate is a little bit further away than my local Constantia Valley vineyards but the trip was well worth making.

Alas, the main tasting room with its expansive views over the Atlantic Ocean barely 1 km away – from Long Beach to Kommetjie – was closed for a wedding. I was instead directed to the alternative entrance via a small lane leading off Chapman’s Peak Drive.

The offices were closed, it being a weekend, and so I nosed around to find the tasting room. I found it soon enough past the printed wooden harvest crates and clay amphorae. This was the previous tasting room but nonetheless grand in French style, well lit, with a high ceiling and ornate wooden furniture. I had none of the ocean views or ripening vines to distract. I was, to start with, the sole guest and so able to complete my ‘blind’ tasting without the risk of overhearing explanations of the wines for other guests.

The full tasting (5 whites and 2 reds) was R60 and waived if I purchased more than R500 of wine. Unusually, each wine tasted was priced separately – R5 or R10 – which made for an interesting bill after.

Alzona was my attentive, pleasant and knowledgeable host. We struck up an immediate connection as she is also studying with the Cape Wine Academy, albeit at the higher Diploma Level.

I opted to taste in 3-2-2 formation. The change in tasting room venue meant that the white wines were not as chilled as they should have been, for which Alzona apologised, but I did not let this spoil my tasting. The simple unbranded glasses were set against an elegant clay spittoon.

The first three whites were near identical in colour. Indeed, all the whites looked very similar: crystal clear, pale and with medium-legs. They varied only slightly from green-yellow to a pale straw yellow.

I never find it easy to distinguish the nuances between very similar wines and especially when there are 5 of them. They each had delicate noses of gooseberry, asparagus, a light peach fruitiness, and varying amounts of aromatic sweetness to suggest some were lightly wooded and others not. This put them in the herbal wine flavour family, indicative of Sauvignon Blanc. They were dry, lightly bodied with a crisp acidity that supported that indication. But, were they all Sauvignon Blanc? Would all 5 wines be of the same grape variety?

Alzona revealed all to me. Sauvignon Blanc was the major grape variety for each wine except for Number 4 which was a Chardonnay. The first was pure Sauvignon Blanc whilst the others contained varying minor proportions of Sémillon. The Chardonnay has been lightly wooded, aged for just 10 months in oak barrels, and so not showing full butter or creaminess. I guess I had some mitigation for not picking it out from the Sauvignon Blancs.

The final white, the premium Isliedh Sauvignon Blanc/Sémillon, deserves special mention. It was my favourite and named after the estate owner’s first grand-daughter. The Sémillon is fermented in clay amphorae; the Sauvignon Blanc sits on the lees for 10 months in steel tanks. This typifies the blend of traditional and experimental wine-making that gives Cape Point its deserved reputation for award-winning Sauvignon Blancs.

The Sauvignon Blanc grapes are still on the vine at the main estate entrance. They ripen later than those in the Constantia Valley which already are being harvested. The strong breezes from the sea keep the vines cool which promotes slow ripening that is so ideal for the grape variety.

My tasting ended with two reds that are not made from vines grown at Cape Point. Both were medium-bodied, red to dark cherry red with a hint of purple in colour. Different on the nose, the first contained darker berry fruits than the second which was fuller and plummy in character. I preferred the second because it was smoother and more balanced on the palate and with a more defined finish. They were a Shiraz (surprisingly) and a Cabernet Sauvignon made with grapes from the Swartland and Stellenbosch, respectively.

I finished with a generous cheese platter (R95) that was well presented with chutneys, fresh fruit and honeyed nuts. I tidied my notes and photos as I ate. I bought the two entry wines from the Splattered Toad range, very drinkable and good value for money.

I left conscious that I did not experience the best that Cape Point vineyards and their wines have to offer. Nonetheless, I much enjoyed myself and shall return again.