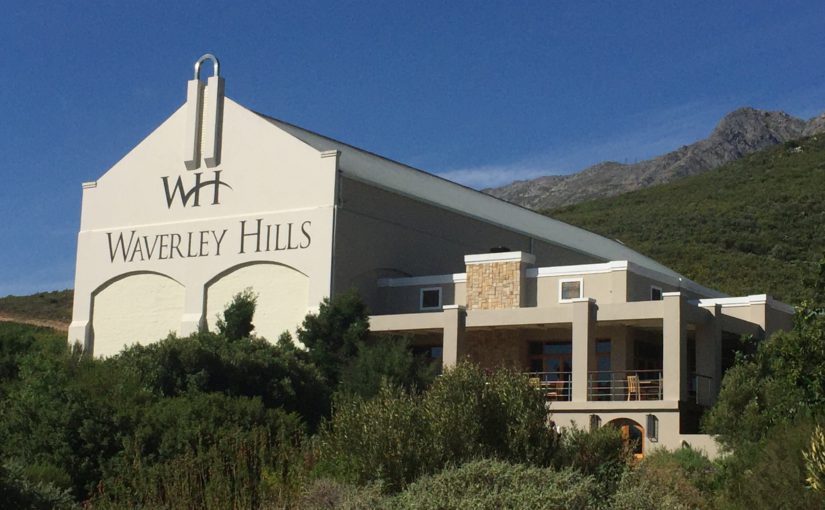 It was my partner’s birthday and so we headed out of Cape Town for Tulbagh. We had no definite plans for the day but decided after lunch to visit one of the local vineyards for tasting. As luck had it, we soon discovered that the Tulbagh vineyards closed at 2pm on Saturdays or offered tasting only by appointment.

We headed North on the R46 towards Ceres and decided to visit Waverley Hills, a vineyard we had heard of and that was open on a Saturday afternoon. We soon arrived and followed the narrow road lined by vines and old cottages. We parked in the sunshine by the tasting room and restaurant.

The environmental pedigree of this estate was immediately apparent as we walked past conservation signs – Waverley Hills was the  first ‘Conservation Champion’ in the region. The area beside the steps up to the tasting room was beautifully landscape with indigenous plants beside a trickling stream. From there, the views across the Witzenberg mountain range were magnificent.

The tasting room was quiet but airy and welcoming. All around were neat displays, bottles lined up like soldiers to attention, and wine barrels showing off special offers. I wanted to taste ‘blind’ and it was difficult to avoid looking at the many colourful signs and labels.

Jean was our host. She explained that we could taste any of the range for a mere R20 each. Even better, the cost was waived if we bought any wine. This was a far cry from the Constantia Valley!

The estate produces mainly red wines but we started with three whites: one MCC and two still, white. I liked the simple but classy estate logo etched onto each glass. The wines were smooth and dry, crisp, unwooded and medium in complexity. These were made to let the natural flavours show through. The MCC was the only single variety wine: pure Chardonnay.

The other two whites were blends – one 56% Sauvignon Blanc, 44% Sémillon and the other 62% Viognier, 25% Sauvignon Blanc, 13% Chardonnay. It is fair to say that I was part right in my tasting choice of the grape variety in each wine.

Time was already pressing on – the tasting room closed at 4pm – but Jean was charming and patient. We were the only tasters there and she enjoyed listening in to our deliberations as she served us the red wines in groups of three. Eagerly, she clutched her tasting notes to reveal all after we had tasted each set of red wines.

As with the whites, the red wines had a distinct but delicate character. I was reminded of how much I enjoyed the wines from Silvermist, the only other organic vineyard I have been to. Jean explained that Waverley Hills was completely organic, even to the extent that their wines are bottled and labelled on the estate to avoid any contamination.

The 1200 hectare estate has just 30 hectares under viticulture and with a further 10 hectares of olives. The vineyards are irrigated with pure spring water and the vines fertilised with composts and manures. As with Silvermist, fynbos and other indigenous plants are encouraged to grow in close proximity to the vines and provide cover for natural predators to keep pests at bay.

It was most interesting to be tasting wines away from the Constantia Valley. It was challenging as a ‘blind’ taster too. Just as I felt I was beginning to get the feel of the different grape varieties, I was knocked off my tasting perch. Here was a mix of blends as well as varieties I had little tasted or not tasted before – Cabernet Sauvignon and Grenache – to tempt and please. It was new and intriguing too to taste a red wine blended with a white grape (4% Viognier).

We tasted eight reds in all – too many to describe individually here – and ended with a sweet, non-vintage fortified wine called a Red Jerepigo. It was very distinct like no other. I struggled to find words to describe the nose with its heady sweet aroma of plums. It was creamy and jam-flavoured on the palate. This was non-vintage as it is made from Cabernet Sauvignon grapes from different years. I read after that jerepigos are usually referred to as communion wines as all denominations use them for sacraments.

Earlier, the 2012 Shiraz caught our attention and scored high on our ‘likeability’ tasting scores. It had an almost strawberry and raspberry nose – reminiscent of the Pinotage I tasted at Groot Constantia – with a sweet plum flavour and light on the pepper spice I usually associate with a Shiraz. This was another wine to buy.

We finished long after closing time and Jean could not have been more attentive and kind. We bought a number of bottles: the 2015 Brut MCC, two each of the 2012 Shiraz and the 2015 Grenache, together with a bottle of the Red Jerepigo.

As so often happens, and it seems especially so with wine-tasting, the disappointment of finding one estate closed is more than made up by the next visited. Waverley Hills impressed in so many ways. I loved the natural character of the wines that were more subtle than those I had tasted closer to home.

Waverley Hills offers better value for money too by some 40% or so – not just the tasting cover charge but the wines too – compared with the grand, historic and boutique estates in the Constantia Valley. I cannot wait to taste these organic wines at home again.