Surprisingly Good – and Not Only for the Red Bus Tourists 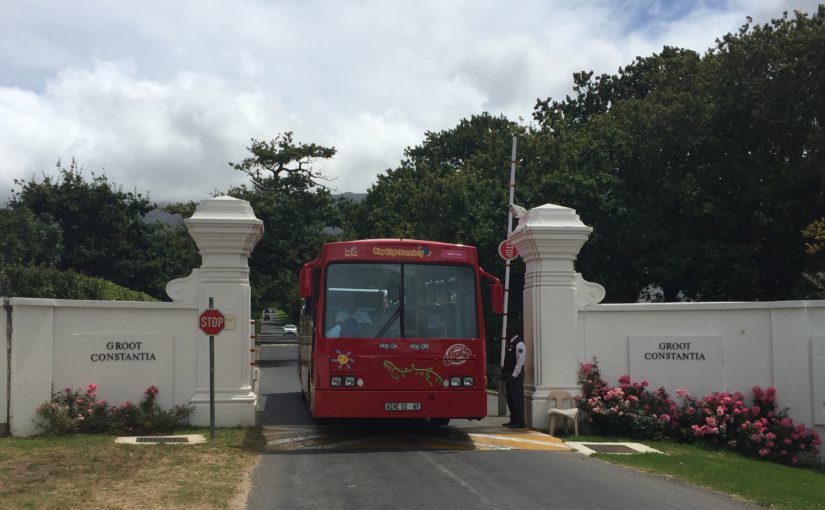 A red tourist bus was leaving the white gates of Groot Constantia as I arrived. It was a symbolic moment and succinctly captured my apparent reluctance to visit this great vineyard.

The comprehensive website proclaims “We are South Africa’s oldest wine producing estate”. It was founded by Simon van der Stel in 1685. The Constantia estate was his home and where he produced wine for 27 years. Steenberg wine estate might quibble with this claim, being the “Cape’s first farm, established in 1682”. Nonetheless, Groot Constantia is now very modern and with a well directed tourist route through the many historic buildings and places to eat and visit.

I headed for the expansive tasting room. It was not my first time but my first since starting to study wine and so it felt something of a new experience. I chose a table away from the bus load of Japanese tourists to somewhere quieter and where I could concentrate on my tasting.

Not all wines for sale are available for tasting and I selected 5 from the 8 that were (R75, etched wine glass included). I chose both whites and three reds. My hostess, Schauné, understood my desire for ‘blind’ tasting and gave me the wines in a different order.

The two whites – served at room temperature and not chilled – were very similar in colour, the first being more of a straw-yellow and the second a green-yellow. Both had low ‘legs’ that reflected the relatively low 13.8% alcohol content. I struggled to describe the nose accurately but picked out gooseberry and red apple for glass 1 and kiwi, green apple and asparagus for glass 2. These were drinkable wines, simple and clean on the palate, dry and with a crisp finish.

I knew I had to up my tasting game with the red wines. Surely things could only get better? My heart sank when I saw the three glasses side by side. All three were medium-full bodied and near identical in colour. Glass 6 had a slight bluish tinge but otherwise was much the same dark cherry red as the other two and with similar medium ‘legs’. Glass 4 had the cigar box and dark chocolate nose of a Merlot and was full in the mouth with firm tannin and a medium finish.

Glasses 5 and 6 were clearly different on the nose and palate. The first was full of blackcurrant and blackberry, peppery on the palate and also high in tannin. The second was more red berry with some wood and softer tannin.

My assessment for the 3 glasses was: Merlot, Shiraz and Cabernet Sauvignon. Well, at least I guessed one right today – the Merlot! Schauné was really helpful in explaining why I had had such difficulty. She had good knowledge and was a successful student of wine too.

Groot Constantia’s red wines are all grown on slopes between 50m and 100m above sea level. They are exposed to the cool breezes from the Atlantic Ocean and so not all ripen fully. None of the reds develop their full colour and so are medium in body and not heavily bodied. The Shiraz, for example, is not as peppery as a usual Shiraz. The Cabernet Sauvignon, a variety I have little experience in tasting, has thicker skins and known as the ‘King of Reds’ and is good for ageing.

This makes Groot Constantia’s reds more drinkable to many but darn difficult to pick out in ‘blind’ tasting as I discovered. Schauné’s explanations helped and I learned a lot. After, she poured me a glass of the single variety Pinotage, another wine I have little tasted, which had a nose of strawberries and raspberries together with a smooth, balanced palate. I also tasted the premium Gouverneurs Reserve, a near equal blend of Cabernet Sauvignon, Merlot and Cabernet Franc, with added Petit Verdot. This was my favourite red – and with a price to match – with a strong nose of blackberries and red cherry, elegant, complex and smooth on the palate and with a long finish.

Groot Constantia was a very pleasant surprise and I had my prior perceptions severely challenged, and not just by the wines. The wines were all of a high quality, many award-winning too. I shall go again but shall choose a moment out of the tourist season when the tasting room is a little less hectic.

The Latin meaning of Constantia means constancy or steadfastness, attributes that Simon van der Stel held in high esteem. They are certainly apt terms for the enduring history of over 330 years wine-growing on the estate.

I did buy one wine. It was one I didn’t taste too which is a first for me on a wine-tasting visit. I bought the last three bottles – yes, the very last three bottles – of 2015 Chardonnay (Platter’s 5 Star rating). Little did I expect that ‘blind’ tasting would end up as ‘blind’ buying.