“Swimming Pool” Wines for Now – or Leave until Later 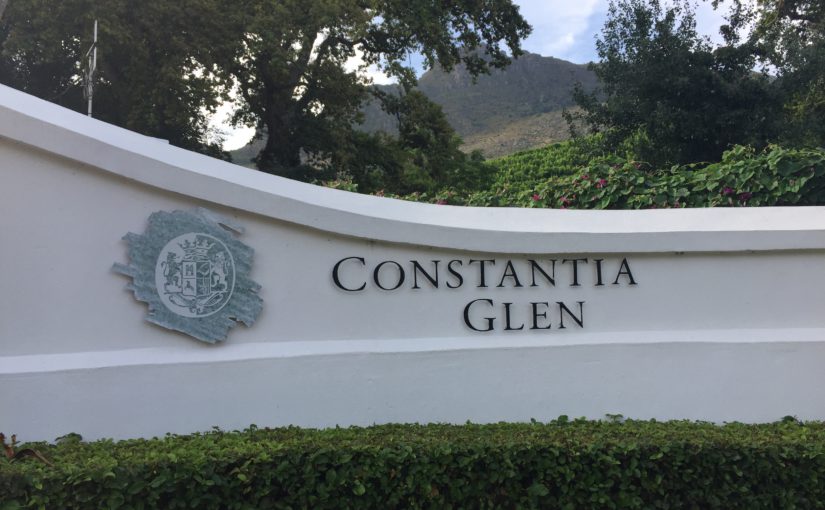 Constantia Glen was bustling with holiday tourists and friends spilling out from the long farmhouse onto the terraces and lawns overlooking the Constantia Valley. My partner and I arrived mid-afternoon amid full December sunshine at this 60 hectare estate (29 hectares under cultivation) nestled between Table Mountain and Constantiaberg. The vineyard is situated close to the top of Constantia Nek, between 130-270 metres above sea level, and facing North-East. It therefore enjoys the late afternoon sun that is ideal for slow ripening.

We had been here before but for a casual drink with friends rather than for wine-tasting. I was expecting much as we sat at a neat table in the tasting room. I asked for ‘blind’ tasting.

We started with three whites, then a rosé, and ended with three reds. The whites were pleasant enough, clear and pale in colour, with a crisp acidity but light in the finish. The third white had a fuller flavour and tasted slightly wooded. The rosé was a very delicate pale pink, almost too pale for my liking, It promised much from the strawberry nose but I didn’t enjoy the rough palate and weak finish.

We paused to read the labels on the bottles. Our tasting host explained that the first white and the rosé were from the Constantia Saddle range, non-vintage, lower in price, and for easy drinking now. Karl Lambour, the winemaker, calls the rosé his “swimming pool wine” and it is easy to understand why. I was pleased though to have correctly identified the grape varieties: all Sauvignon Blanc.

I was hoping for better with the reds. I tasted Merlot but other varieties too. I sensed they were all blends which always make it hard correctly to identify the grape varieties. The mix of red and dark berries, cedar notes and medium tannins led me to think they were Merlot-based. The last red was more complex, the best of all, with spicy peppery notes to suggest a hint of added Shiraz or perhaps Malbec.

I examined the bottles and listened again to our host. The first red was from the Constantia Saddle Range. The other two were called Constantia Glen Three and Five, respectively, to reflect the number of grape varieties in their blends. We were told that, as with the whites, the Saddle red was for easy drinking. The other two Bordeaux-style reds were for keeping to mature in 5-10 years. I almost felt they were trying a little too hard and the wines were over-blended.

We left without buying a bottle between us. That’s rare indeed. I reflected after. My tastes are maturing and I want less than just easy drinking wines. Also, for wines to be priced at over R200-250, I am expecting something distinctive and special.

Constantia Glen’s wine falls between two stools: unrefined for easy, undemanding drinking now at one end and for laying down to keep but not ready yet at the other. The latter were overpriced for now and didn’t offer enough promise for me to buy.

We walked away past the many tourists and social drinkers, deep in conversation and admiring the scenic setting and glorious views, swelled by the late opening hours compared to other wine estates in the Constantia Valley. I am sure they enjoyed their experience. For me, none of the wines hit the right notes and so I left empty-handed and disappointed.